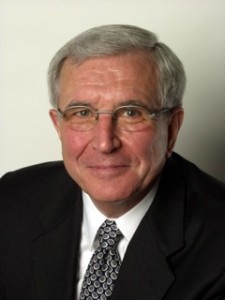 Born April 14, 1938, and worked at The Wall Street Journal for 39 years, the last 12 of those as deputy managing editor. After retiring in 2004, he served a two-year term as public editor at The New York Times.

The crucial search for a business model that will enable journalism to survive in the decades ahead is yielding a wide variety of ideas about possible sources of revenue.

But few raise as many questions for me as the “sponsored content” turning up in a growing number of online publications. In these arrangements, advertisers often cough up extra dollars to publish articles of their crafting that are packaged to disguise as much as possible that they are advertisements.

I think business journalists need to keep an eye on this concept as the Society of American Business Editors and Writers enters its second half-century because corporations seem to be key users of sponsored content to address issues that concern them.

Theoretically, these corporate messages designed to avoid being perceived as advertisements could attempt to counter or contradict real news stories on the same page. More broadly, I worry about the legitimacy news columns have earned as a source of fair and impartial coverage of events — thanks to thousands of professional journalists over the years.

Could that legitimacy, I wonder, eventually be undermined if contradictory paid content on the same page leaves confused readers doubting even the real stories?

Some talented and dedicated editors and their business-side colleagues see sponsored content — especially when it carries a premium ad rate — as a potentially vital source of revenue in their struggle to survive. Most of them also insist that readers can actually get interesting and useful information from the corporate content even though it may be related to the company’s business and promote its interests.

The effort to disguise the paid content starts with basics. The word “advertisement” — long a standard reader alert required for “advertorials” or any paid content not in display format — is almost never seen.

Taking its place are euphemisms such as “BrandVoice” or “Bulletin,” usually accompanied by the company name or logo. The headline and text type of the sponsored content on some sites is strikingly matched to that of the publication’s real news stories.

Editors offering sponsored content can point to some subtle signals that they do require advertisers to provide to distinguish it from real news stories. Although sponsored content on some sites is intermingled with news stories, other publications group the paid articles in one place on the home page. Or the background for paid content is a slightly different hue.

Given the leeway advertisers now have to make their advertisement seem more like an op-ed pieces or an article by an outside contributor, I fear it will be hard for publications to ever get much of the genie back in the bottle.