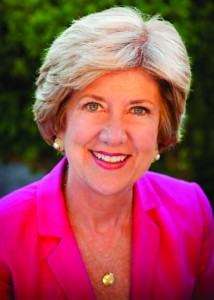 O’Bryon is the president of South Carolina ETV, based in Columbia, SC. ETV is the public media network for the state with 19 television and radio stations. She is the founding executive editor of “Nightly Business Repor”t and was one of the two original co-anchors for the program. She was born and raised in Washington, D.C.

But business news is not all about numbers. Early in my business journalism career, I realized that like so many other fields in journalism, good story telling and the people behind the numbers are what provide substance and staying power.

As I mapped out my approach to business news, I often tried to look for the human interest angle. The unexpected. The story behind the story.

The story I found that was most compelling came not from New York or Washington but from Omaha, Neb. It was a story we produced for “Nightly Business Report” in 1994 about Rose Blumkin, better known as “Mrs. B.” At the time I interviewed her, she was 100 years old. She founded Nebraska Furniture Mart, the nation’s largest furniture store under one roof.

Mrs. B came to the United States from Russia when she was just a young girl. She wanted to make a good life for her mother, whom she called “my princess.” She said in the interview, “I came from Russia 75 years ago. I started in the basement. Never lied. Never cheated. Never been a big shot.” It was a story Mrs. B loved recounting with her customers.

And when we caught up with Mrs. B, she was still active in the carpet division of the company she founded. Her agility with numbers impressed her customers. They would come in and tell her the size of the room they needed for carpeting. Without a calculator, she told them how many yards were needed and the price.

Her hard work and drive led to a successful furniture business that was eventually acquired by Warren Buffett’s Berkshire Hathaway. Buffett talked about Mrs. B’s great ability to know how to deliver the best value to the customer and to “outwork” everyone else. He said, “She knows what she knows and knows what she doesn’t know. She defines what I call her circle of competence perfectly.”

We visited Mrs. B on a later trip to Omaha, and she was still working at the store, where she continued to use a golf cart to get around the expansive store. Mrs. B died in 1998 at the age of 104.

There are some basics from which we can all draw. Mrs. B’s values of hard work and honesty built the business. She showed that one person can make a difference for any organization. Her facility with numbers was a big factor in her success.

But it was her personal story that was the standout. Numbers are the daily language of tracking business and markets, and we need those numbers. Stories about people provide the fabric and the texture of business news.