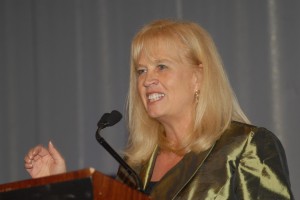 Born May 29, 1952, became director of the Knight-Bagehot Fellowship in Economics and Business Journalism at Columbia Graduate School of Journalism in 1993. In her 20 years as a business journalist, she has reported, written and/or edited for the Coralville (Iowa) Courier, Purchasing Magazine, BusinessWeek, Institutional Investor, Working Woman, U.S. News & World Report and Lear’s. A graduate of New York University and Columbia Graduate School of Journalism, and a 1981 Bagehot Fellow at Columbia, she is the author of “Biz Kids’ Guide to Success: Money-Making Ideas for Young Entrepreneurs” (Barron’s, 1992) and editor of “Writing About Business: The New Columbia Knight-Bagehot Guide to Economics and Business Journalism” (Columbia University Press, 2000). A former president of the New York Financial Writers’ Association, Thompson is the recipient of numerous journalism awards, including the NYFWA’s Elliott V. Bell award for making a significant, long-term contribution to the profession of financial journalism.

In the early 1970s, business reporting was still much a backwater in journalism — a bleak wasteland. As veteran business journalist Chris Welles once recalled, “If you did a lousy job covering city hall, couldn’t hack it writing obits, weren’t too swift taking classified ads over the telephone, then they sent you to the business section. Maybe they even made you business editor.”

But by the mid-1970s, with the looming oil crisis, the near bankruptcy of New York City, and the simultaneous appearance of both recession and inflation, business and economics became front-page news. And in 1975, Columbia University gave birth to the Walter Bagehot Fellowship in Economics and Business Journalism.

The brainchild of Elie Abel, then dean of the Graduate School of Journalism at Columbia, the “Bagehot” was to be similar to the Nieman Fellowship at Harvard, a program for mid-career journalists who wanted to spend an academic year at Columbia. But unlike the Nieman, the Bagehot was to be rigorous: at least five courses per semester, complete with final exams.

Training journalists, not academics, the program would be rooted in the Journalism School, with special seminars and dinners tailored specifically to the needs of journalists; at the same time, Fellows would study economics and business, drawing on the resources of the entire university.

The co-founding directors of the Bagehot Program were Steve Shepard, who later became my boss at BusinessWeek, and Soma Golden of The New York Times. I once asked Steve why in the world they named the program after an Englishman (Walter Bagehot had been an editor of the Economist a century earlier) and why after someone whose name was sure to be mispronounced. He responded, “Well, we couldn’t think of an eminent American journalist, a Walter Lippmann, of economics. Those who didn’t know his name would just have to learn.”

The name, by the way, is pronounced BADGE-it. The program was renamed the Knight-Bagehot Fellowship in 1987 following a major endowment gift from the John S. and James L. Knight Foundation. Shepard and Golden each ran the program for one year. The directors who followed were Welles, the eminent journalist who passed away in 2010; Mary Bralove, formerly of The Wall Street Journal; Pamela Hollie Kluge from The New York Times; and Pauline Tai from Money magazine. I’ve been director since 1993.

Much has changed in the nearly four decades since the Fellowship was founded. In many ways, the world has gotten smaller as developments in technology and the growth of the Internet have brought us closer together. But one thing has not changed. Business and economics are complicated, and writing about them is risky. Every day holds a chance for mistakes, misunderstandings, and misrepresentations. A careless error in an investment story could cost an investor thousands of dollars.

The fact that business and economics touch people’s lives so directly puts incredible demands on journalists to be accurate, reliable and thorough. Indeed, business journalists must be able to understand the intricacies of the field and write about them in clear, concise, intelligible prose.

The purpose of the Knight-Bagehot program is to reduce the risk of careless reporting through rigorous education, and to empower business reporters to feel more confident in their writing. Increasingly, editors staffing business sections realize that to cover the field effectively, reporters need specialized experience and training. And throughout the years they have become more willing to grant their reporters the nine-month leave of absence that is required to complete the Fellowship.

In May 2013, Columbia will graduate its 38th class of Bagehots, and 342 accomplished journalists will have completed this rigorous program. Nearly a fifth of Bagehot graduates found the fellowship year so invigorating that they applied and were accepted for admission to Columbia Business School to complete an MBA degree.

The majority of Bagehot alumni, including those with MBAs, have remained in the field of journalism and have turned their personal academic enrichment into enriched journalism. Many have gone on to win impressive journalism awards and honors. And several are sharing their knowledge and expertise as teachers and educators.

In 1996, we began recognizing the work of our accomplished alumni by awarding the “Best of Knight-Bagehot” at our annual fundraising dinners. Renamed the Christopher J. Welles Memorial Prize in honor of our esteemed former director, the prize is presented each year to a former Bagehot Fellow whose work best epitomizes Chris’s ideals of thorough reporting, good storytelling, and timeliness.

Some of our winners wrote books, including John Authers, David Wessel, and Greg Farrell, and two of our winners, Caroline Donnelly and Peter Kibiriti, launched new business publications. All of the prize recipients were acknowledged for producing outstanding business journalism, and I am certain that Chris would be proud to know that the prize that bears his name is going to such deserving journalists.

My year as a Bagehot Fellow during Chris’s leadership literally changed my life. And while I could never hope to be the great leader or role model that Chris was, the Knight-Bagehot Program carries on the mission of its founders and continues to transform the lives of those who are fortunate enough to be granted a fellowship.