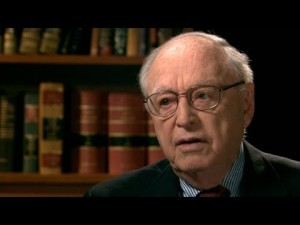 It’s the primary reason why I received a Nieman Fellowship. It’s why I became a first-time author with a blurb from the great John Kenneth Galbraith on the dust jacket of the book I wrote while at Harvard. It’s why I won my first journalism prizes. And it’s why I came to devote much of my last quarter-century as a Washington Post reporter to corporate crime and grave misconduct.

The story dealt a lasting blow to the then widely-held notion that science and technology always or nearly always produce benign results. This excerpt sums it up:

“In September 1960, the U. S. licensee of the German investor and manufacturer of thalidomide — a sedative or tranquilizer, depending on dosage — applied for FDA approval to sell it in the United States. Not until April 1962 did it become widely known that in numerous other countries, the mothers of several thousand thalidomide children had taken the drug during the first trimester of pregnancy. I interviewed Dr. Kelsey three months later — on Friday, the 13th of July.

“Seventeen days later, a Senate subcommittee led by Hubert Humphrey held an FDA oversight hearing at which it came out that in a promotional stunt, the licensee, the William S. Merrell Co., had contrived to give away 2.5 million so-called ‘experimental’ thalidomide pills to physicians, causing 10 American infants to be born with seal-like flippers rather than arms and legs.

“The story transformed Capitol Hill. Suddenly, Congress became a tiger, rushing to toughen the drug law by passing with what came to be called the Kefauver-Harris Amendments of 1962.”

“From the mid-1960s through much of the 1980s” — I’m quoting a 2002 article in The American Prospect — “Congress played an integral role in drug safety. Lawmakers [principally the late Reps. L.H. Fountain and Ted Weiss, but also including Gaylord Nelson and Ted Kennedy in the Senate] meticulously probed the regulatory histories of dubious drugs, uncovered FDA weaknesses and ordered corrections.”

I was privileged to cover all or nearly all of those oversight hearings even if at the Fountain and Weiss hearings I was alone at the press table much of the time.