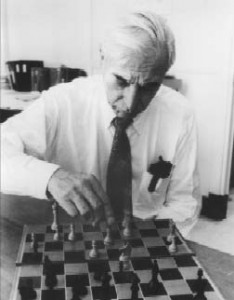 Business journalist Joseph Livingston’s legacy extends well past the realm of business and economics journalism. From the classroom to the Federal Reserve, Livingston’s impact was, and still is, being felt.

Born in New York City on Feb. 10, 1905, Livingston received his bachelor’s degree from the University of Michigan. Livingston wed Rosalie Logise Frenger in 1927, and their marriage would last 62 years until his death in 1989.

Livingston belonged to a rare breed of journalist. He had a deep understanding of economics. The blending of his journalistic abilities with his considerable knowledge of his field set him apart. Temple University manuscripts report that Livingston audited economics classes at the College of the City of New York in 1929.

Between 1931 and 1934, Livingston served as executive editor of the New York Daily Investment News. After a short stint as public utilities editor for Financial World in New York City, Temple University records state that Livingston began working as an economics editor at Business Week’s New York offices. He went on to hold the position of staff economist for the publication.

During World War II, Livingston took a leave of absence from business journalism to work with the U.S. government from 1942-1945.

In 1947, Livingston began working at the Washington Post. It was around this time that he began his most famous semi-weekly column, “The Business Outlook,” which would he would go on to write until his death some 42 years later. Originally named “Minding Your Business,” the column focused primarily on economic issues. It became nationally syndicated in late 1947 and went on to appear in more than 50 newspapers across the country.

Livingston’s take on column writing is revealed in a quote attributed to him by the Business News Luminary website.

“Column writing involves yielding to your prejudices after a hard fight,” he said. “You try not to grind axes, but you often have to take a position. You try to divorce your strongest feelings from your writing and you try to be fair, but that’s the way it is.”

In July 1948, Livingston became the financial editor of the Philadelphia Bulletin. He wrote columns for the paper until 1972.

From January 1971 to June 1972, Livingston was an honorary professor of economics at Temple University. Livingston then moved to the Philadelphia Inquirer in 1972, where he remained until his death in 1989.

The Livingston Survey is a part of Livingston’s legacy that survives to this day. In 1946, Livingston began a semi-annual survey in which he asked economists to provide forecasts of key macroeconomic variables. These included real and nominal gross domestic product, inflation, unemployment rates, and interest rates.

Herbert Stein, a member of the National Association of Business Economists, praised Livingston’s enterprise in an obituary.

“Joe was no armchair, thumb-sucking economic journalist, living on summaries of the studies of economists. He went out for the facts, to see for himself what could be seen and to talk with the active people, here and abroad,” Stein wrote.

What started out merely as material for a column quickly gained steam. In a 1997 paper titled, “The Livingston Survey: Still Useful After All These Years,” the head of the macroeconomics section of the Philadelphia Fed Research Department Dean Croushore wrote that economists eventually began to take note of Livingston’s work.

“As economists began seeking ways to test the rational expectations theory, they turned to the Livingston Survey, which was the only good collection of forecasts of macroeconomic variables,” Croushore wrote.

In 1978, the Philadelphia Fed collaborated with Livingston and entered the survey data into a computer database where it was readily available for economists. When Livingston died in 1989, the Fed took over this survey, which it still administers to this day.

Livingston, one of the original founders of the Society of American Business Editors and Writers, received several awards during his career. In 1965, he won a Pulitzer Prize for a series of articles titled, “The Power Pull of the Dollar,” which analyzed the economic independence of Communist countries and their desire to resume trade with the West.

In addition, he won the Loeb Award four times, the Hancock Award three times, and the Overseas Press Club award for excellence in reporting from abroad on three occasions. Livingston was also the first SABEW president from 1964-1965.

“He was one of the outstanding journalists of his time,” Roberts said.

Jeremy Osir is a native of Nairobi, Kenya, and an economics major and business journalism minor in the Class of 2013 at the University of North Carolina at Chapel Hill.