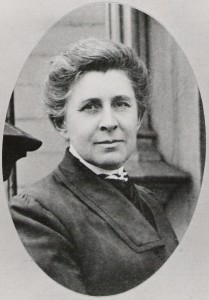 When Ida Minerva Tarbell, daughter of an oilfield tank maker and middle-named for the Roman goddess of wisdom, arrived in northwestern Pennsylvania in 1857, no one could have imagined the indelible role she would play in American journalism and the coverage of business — one in particular.

One of the crusading journalists labeled “muckrakers” by President Teddy Roosevelt, Tarbell was the lone woman among such illustrious reporters as Upton Sinclair, Lincoln Steffens, Peter Finley Dunne and others. She was different from other journalists and other women from an early age.

As the lone woman among the 40 “hostile and indifferent boys” in her class of 1880 at Allegheny College, in Meadville, Pa., she studied a wide range of topics and became interested in technology, peering into the world of the minuscule with a microscope and speaking on a rudimentary telephone.

Tarbell’s first foray into journalism was on the staff of The Chautauquan magazine, where she hoped only to earn “pin money” but grew in professional stature until she began to write articles for publication. She wanted to learn about magazine production, and under the watchful eye of the composing room foreman became obsessive about detail and having things right.

Tarbell spent three years in Paris, speaking French, studying French revolutionary women and supporting herself solely on the strength of her reporting and writing. During the Paris years Tarbell had experiences that remained with her for life: she truly became professional in the world of journalism, and she became sensitive to social issues in a way that was reflected in her later writing about such topics as factory safety and philanthropy. To see a former countess rummaging through the trash for something to eat was deeply meaningful for her.

Tarbell wrote on a wide range of topics from Paris for American newspapers, and her “syndicate” kept her afloat for three years of great adventures starting from her base in the Latin Quarter. But an encounter with Samuel C. McClure, editor of the eponymous magazine, who looked her up in Paris after reading her dispatches, brought her back to the United States. 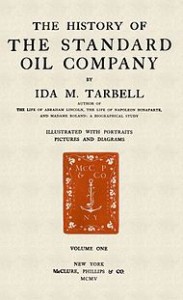 At first Tarbell was the magazine’s principal biographer, and her writing on the lives of Abraham Lincoln and Napoleon Bonaparte boosted circulation and helped her become, as McClure later wrote, “the most generally famous woman in America.”

Tarbell was best known for the stunning series on the history of the Standard Oil Co, and its founder, John D. Rockefeller. She no doubt was driven in part by her childhood experiences of the oil industry, in which her father lost his business and income. But she also had first-hand knowledge of the oil regions in a wide sense, and as a college-educated woman had the intellectual firepower that such a monumental series — two years’ worth of articles — required.

The series brought infamy down on Rockefeller’s head, and “the Standard,” as it was called, soon was broken into pieces. Tarbell never said she felt pleasure at the demise of the company, but it is hard to imagine she did not.

She wrote in the autobiography that what she was doing “what we regarded as a legitimate piece of historical work. We were never apologists nor critics, only journalists intent on discovering what had gone into the making of the most perfect of all monopolies.”

Tarbell had two themes in her business and investigative reporting. The first was that business is important, can be profitable and is not inherently evil. The second was that business had certain obligations to its workers, with regard to their human needs that in many ways went unfulfilled. She believed that good treatment of workers would lead to increased productivity and profit.

Examples of Tarbell’s later business writing showed the breadth of her interest. She wrote of Pittsburgh as “a tariff-made city” and decried the millionaires who manipulated iron and steel tariffs to grow great wealth. Tarbell wrote approvingly of “scientific management” of companies as a way of increasing the speed of factory piecework.

Tarbell also wrote favorably of women as managers in factories, finding them no less capable than men. (She never fully explained why she later wrote of woman’s place being in the home, and why she opposed suffrage for women.) She also sharply criticized unsafe work conditions, especially in American mines and in the garment-manufacturing sweatshops of New York City. It is possible to detect a shift from her fact-based reporting on Standard Oil to warmer and more compassionate pleas for attention to worker welfare.

Tarbell’s lifetime of journalism made it possible for her readers to experience in painstaking detail some of the important but distant issues affecting their lives. And through her unmistakable fact-based approach, she still makes it possible for today’s readers to gain insight in the personalities, workplaces and issues of her time.

Robert Kochersberger is an associate professor at North Carolina State University whose master’s thesis was on Tarbell’s work at The Chatauquan. He is also the author of a book on Tarbell and is currently researching her time in Paris.