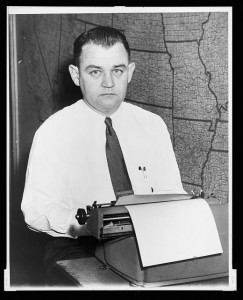 At the beginning of the 21st century, the TJFR Group, publisher of a newsletter about business journalists, and MasterCard International honored the top 100 business news journalists of the previous century.

Vermont Royster, editor of The Wall Street Journal from 1958 to 1971, ranked fifth among the greatest business journalists of the 20th century. The judges noted that Royster “helped build the paper’s reputation as the nation’s most intelligent voice for business reporting.”

The recognition was well deserved, but in reality Royster spent the bulk of his career as a general interest columnist and editorial writer, not a business journalist. “I didn’t think of him as a business journalist even though he wrote for The Journal,” said his daughter Eleanor Eidels. “I don’t think he really saw himself that way either. He was a thinker and a writer about all kinds of things.”

It was only during his time in the Washington bureau from 1936 to the end of 1939, and then in 1946-47 after he returned from World War II, that he was primarily a business journalist. While he often wrote columns and editorials about business issues, he was not a full-time business journalist in the way other journalists on the list had been. In 1975, he did receive a Gerald Loeb Award, the highest honor in business journalism, for his columns on business and economics topics.

Royster explained how business journalists should be held to a higher standard than other reporters and editors. While a reporter covering a fire can exaggerate the size of a fire without hurting anyone, a business journalist cannot inflate or deflate such facts. “And the reporter who does this may directly injure a great many people,” wrote Royster. “For so long as the error stands uncorrected, people – the reporter’s readers – are going to act on the information he gave them. They will buy and sell the stock and the error will cost them money. They have been injured by their trust in the reporter’s accuracy.”

Royster warned business journalists not to run “dope” stories full of “scanty and unverifiable information.” He also cautioned newspapers on how they conducted polls related to business issues. While a wrong poll on the eve of an election might only make the paper look ridiculous, he wrote, an incorrect poll on steel inventory levels on the eve of a strike could affect decisions made by the union, the management of the steel companies, and other companies who relied on the steel to make their products.

Royster expressed his desire for business journalists to resist the temptation to “jazz up the lead with exaggeration” even though such a lead paragraph might be permissible in sports reporting. He also cautioned business reporters to resist influence from advertisers. “I know of no other field of journalism where ethics calls for greater self-discipline in accuracy, thoroughness, clarity and completeness than the area of business journalism,” wrote Royster.

A decade later, shortly before his full-time retirement, Royster sounded the alarm about the quality of business journalism in the country, calling it lousy and blaming newspapers for creating a harmful distinction between business news and other news. He said, “It’s part of the basic life of a community – there’s nothing that has more effect on a community than the business situation. These are bread-and-butter matters to every citizen.”

Royster noted that smaller papers in the country were trying to provide business coverage such as stock market news and insight like The Wall Street Journal and The New York Times, but that was a mistake. They should focus their coverage on local industries.

Royster was far ahead of his time. Business journalism underwent a great growth period in the 1980s and 1990s during the country’s economic expansion. Problems remained, including the activities of reporters and editors who were not trained to write about business and economic issues, and a paucity of critical coverage and inquiry into the practices of companies.

Royster could relate to the lack of training. “When I started,” he said, “I didn’t know any more about business reporting than a jackass. I’m not sure that I do now.”