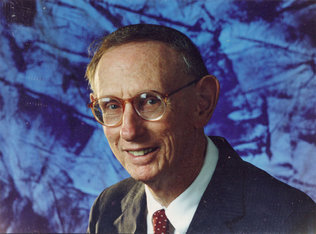 Remembered for his unflinching Southern temperament, Russell was an air combat veteran and a pioneering voice of business journalism in South Florida.  During his 42-year career at The Miami Herald, Russell diligently charted the region’s rise as a global economic hub.  A respected editor and columnist, Russell tackled national economic trends and sought to reach readers through simple and understandable writing.

Russell also did business commentary for Miami talk radio and engaged in extensive freelance writing throughout his career.  His pieces were published by The Wall Street Journal, The New York Times, Dow Jones Newswires and even The Times of London.

Russell’s dedication to business journalism, as well as his kind nature, left strong impressions on many young reporters.

”Jim was a fine journalist and a consummate gentleman, a bit of a rarity in a newsroom,” said Gail DeGeorge, economy editor for Bloomberg News and a former Miami Herald business reporter in the mid-1980s.  “He was helpful to me as a young reporter, pointing out sources and resources and giving advice without being condescending.”

Mimi Whitefield, who has reported for The Herald since 1980, said that Russell was the definition of modesty.

“Jim was a soft-spoken, unassuming man,” Whitefield said.  “It was years before some of the reporters learned that Jim flew 65 missions on a B-26 bomber in World War II.  But if asked to share his war stories — both as a reporter and during the actual war — he always obliged.”

In 2003, Russell wrote a definitive account of his wartime service in a memoir titled “Out of Ouachita: One Man’s Odyssey Through the Greatest Generation.”  In his book, Russell extensively discussed his combat role as a gunner aboard the B-26 Marauder.

After the war, Russell joined the ranks of the old International News Service as a wire reporter.  He joined The Herald in 1957 and was quickly promoted to assistant city editor and then business and financial editor.

While business journalism would become Russell’s lifelong passion, he was unexpectedly assigned to the beat by The Herald’s assistant managing editor, Al Neuharth.  (Neuharth would go on to head the Gannett media empire and found USA Today.)  According to Whitefield, Russell said that he didn’t know the difference between a stock and a bond when he first received the assignment.  However, he took Neuharth’s challenge seriously and was proud of his work.

Russell’s background as a wire service reporter gave his business and financial writing a unique style.  Above all else, his writing was simple and accessible.

“His gift, of course, was writing a financial column that virtually any reader could understand,” said Dave Satterfield, who worked at The Herald for 17 years as a writer and editor.  “He was a disciple of the Warren Buffetts and John Bogles of the world.”

While modest and well-mannered, Russell was passionate about how he conducted his work.  He was resistant to new technology.

“When computers were introduced into newsrooms, Jim continued to write his columns on an IBM Selectric typewriter,” Satterfield said.  “He then would pull the paper from the typewriter and retype it into a computer. This behavior never changed while I worked with Jim.”

His energy and longevity stood out in a deadline-driven industry.

“I was amazed at Jim’s ability to churn out three columns a week for decades,” Whitefield said.  “Many of the reporters weren’t quite sure how old Jim was. He seemed ageless.”

In his final column, Russell acknowledged the vast economic potential of the internet, describing it as “a rapid growth industry perhaps unrivaled in the annals of American business.”  However, Russell also implored his readers to consider dangerous parallels between the Internet and 17th century tulip mania, the first speculative bubble in history.  Two years after Russell’s final column, the dot-com bubble burst.

Russell picked up the pen one last time in 2004.  At Whitefield’s request, Russell wrote a review of Joe Treaster’s book “Paul Volcker: The Making of a Financial Legend.”  The piece, which ran in The Herald’s Business Monday publication, was his last for the paper.

“Jim was 82 at the time, but as usual his piece came in polished, well-crafted and on deadline,” Whitefield said.

Russell’s achievements are honored by his alma mater, Louisiana State University.  Russell was inducted into LSU’s Manship School of Mass Communication Hall of Fame in 1998.

Andrew Edwards is a native of Greensboro, N.C., and a history and journalism double major in the Class of 2014 at the University of North Carolina at Chapel Hill.