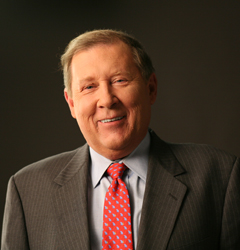 With his jacket unbuttoned and red tie exposed for all to see, Mark Haines took off his glasses and leaned on the left arm of his chair toward his co-anchor Erin Burnett during CNBC’s “Squawk on the Street” on March 10, 2009, in the middle of the recession.

Speaking with a conversational tone that almost encouraged viewers to speak back at him through the TV, the late anchor remarked with confidence, “I’m going to step out on a limb here… I think we’re at a bottom. I really do.”

“I think we’re going to have a rally,” Haines said. “In other words, I think today this is for real.”

And he was right. The market began a rally that has continued five years later.

Haines, who had been with CNBC since 1989 and helped make the network what it is today, wasn’t just making a random guess. Citing his research and conceding possible refutations, Haines assured viewers in a way that only he could.

It was Haines’ in-depth research and genuine care for investors that helped make analysts such as Jim Cramer, who admits to taking the “what would Mark Haines do?” approach when he searches for answers to economic phenomena.

“That’s was him at his best,” Cramer said in a 2013 episode of “Mad Money.” “He recognized that things had gotten out of hand… He had his totems.”

“(His research) is what made him so darn sure of himself.”

As someone who’s seen Haines at his best, Cramer knows that sometimes the key to helping give investors advice is to approach analysis with the same skepticism and rigor as Haines did.

It was that true craving for the truth and knowledge in clutch moments that made Haines not only a great researcher but also an unflappable and highly demanding interviewer.

“Mark was really at his best in times of crisis,” Sanford Cannold, former supervising producer of “Squawk on the Street,” said. “On an ordinary day Mark might not have been his best.

“But Mark was kind of a playoff player.”

It was that clutch gene that allowed Haines to be relentless when asking questions in interviews where he demanded respect — and answers.

“A lot of anchors today are scared to ask the tough questions in an interview. That was Mark’s hallmark,” said Darren Rovell, who started working for CNBC as a sports business reporter in 2006. “The guy was completely fearless and didn’t shy away from asking the blunt question.

“That’s what made him the Everyman that he was.”

Rovell added that this bluntness gave Haines a knack for stealing the show on occasion. Simply put, Haines had a knack for the theater of television.

“I’ll never forget when I interviewed Mets executive Dave Howard on Opening Day at CitiField,” Rovell said. “In the middle of the interview, the producer says in my ear that Mark wants to ask a question.

“The next thing I know, Mark, who was a big Mets fan, is telling Dave Howard how much the team stinks live on our air.”

That was how you knew you were in with him. From David Faber, “the Brain” to Sandy Cannold “Sandman,” Haines was never slow to come up with a nickname for a colleague or even compliment them on air.

When they looked good, so did he. That was his philosophy.

So one could imagine that, when long-time co-anchor Burnett decided to leave for CNN in May 2011 after years of sitting next to Haines, it was tough to leave the always-authentic catalyst of CNBC without a teary goodbye.

“The day before Erin’s last show I told Mark, ‘You should prepare for Erin to cry,’” Cannold said.

And as the show came toward its end, Haines’ predict seemed to be coming to fruition.

With relative composure, Burnett recalled her time with Haines handing him small sentimental trinkets as gifts to remind him of the time they spent together in hopes that she could maybe find a way to repay the man she claimed taught her everything.

“Coming to work for the last five and a half years has been an absolute joy,” Haines said on air for all the viewers to see. “You’re the best… We’re going to miss you a lot.

Not much later in that month, on May 24, 2011, Haines died unexpectedly of congestive heart failure in his home at age 65.

The following day there was a moment of silence on the trading room floor in honor of the man who demanded respect from guests and always fought for his audience’s money in a theatrical manner.

Haines was gone, but the lessons he left for the Cramer’s and Burnett’s of the world stayed.

And Cramer quite possible portrayed that sentiment in the most concise yet accurate way possible in a statement published the day after Haines’ death on CNBC.com.

“He was the standard.”

Max Miceli is a High Point, N.C., native and business journalism major in the Class of 2015 at the University of North Carolina at Chapel Hill.