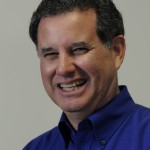 Aly Colón serves as a director of standards & practices at NBC News. As a journalist and trainer specializing in ethics and diversity, his background includes having been The Poynter Institute’s Ethics Group Leader, a Knight-Bagehot Fellow in Economics and Business Journalism, a business editor/reporter and a member of SABEW.

The news coverage of business presents personal and professional challenges to the independence and credibility that business journalists must maintain. Threats to their integrity can arise when business practices collide with journalistic principles.

Cognizant of the dangers such collisions could have, the Society of American Business Editors and Writers (SABEW) became determined to address the issues that affected its members. The organization knew it need to address such potential problems like conflict of interest, active trading and special treatment.

That awareness prompted SABEW to become the first specialized journalism organization to create and adopt a code of ethics in 1974. (Link here to copy of first code of ethics.) The organization subsequently revised and added to it in 1994.

SABEW recognized that journalists who want to cover business with integrity face a moralistic minefield. And the potential for ethical explosions, both small and large, exist as they seek to bring the true business of business to their audience.
Some examples include:

As the present bleeds into the future, the ethical challenges that business journalists face only continue to increase. Some of the emerging issues include:

These concerns about the credibility of business journalism become heightened in times of economic uncertainty. For some, as the focus on remaining employed as a business journalist grows, issues involving integrity may become harder to concentrate on.

“I was concerned at one recent SABEW meeting that journalists seemed so focused on job security that ethical matters seemed to be taking a back seat,” said Pam Luecke, Reynolds Professor of Business Journalism, at Washington & Lee University. 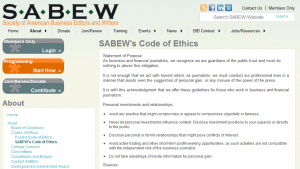 Luecke, who once wrote an ethics column for SABEW, also pointed out that the relationships with public relations practitioners seem to be getting too close, in part because there are so many more public relations people than business journalists these days.

A SABEW survey in the early 1990s also revealed that business news sections felt increasing pressure from their advertising departments that tried to influence coverage on behalf of their clients. It served as a wake-up call to a number of SABEW members.

These integrity issues drew the attention of SABEW member Gary Klott, a business reporter for the The New York Times, who became an author on personal investing and later a syndicated columnist on tax advice. Klott, who died of heart failure in 2002, served as the organization’s president in 1994-95 and played a pivotal role in advancing the cause of ethics within the organization.

“Gary was passionate on the issue, recognizing that a news organization’s editorial integrity is our most valuable asset,” said Sandy Duerr, also a former SABEW president and Klott’s widow.

Klott’s fervor for addressing conflicts of interest, and dealing with the pressures from business interests, came from his own knowledge of how that played out for business journalists like himself. His integrity mattered greatly to him, and he felt concerned about how outside interests could impact the business coverage and affect his profession’s credibility.

“This (pressure on business journalists) had grown up kind of organically in an earlier time when nobody cared much about content in the business section,” said Henry Dubroff, publisher of the Pacific Coast Business Times and someone who is also concerned about the reputation of business reporting and editing. “As a person who had just left The New York Times staff, Gary was a keen observer of these trends without a particularly vested interest to defend. He was his own person.”

Dubroff remembers Klott speaking often about ethics issues at board meetings. During SABEW’s meeting in Chicago in 1992, Klott urged board members to conduct a survey that revealed, among other things, the increasing pressure of newspaper advertising departments to influence news coverage. At least half of the business editors surveyed admitted feeling their news coverage had been affected by advertisers.

“Largely in response to the results, Gary led SABEW to strengthen its code of ethics, approve an addendum at the meeting, and issue a press release summarizing its action. We then urged other professional news organizations to lobby APME and ASNE to adopt the guidelines too,” Duerr said.

As president, Klott wrote about his concerns in the SABEW newsletter, The Business Journalist. There he emphasized the need for a strict separation between news and advertising. In one column, he stressed the organization’s responsibility to turn away from trends that could undermine their editorial integrity and their profession.

“We as a profession should be alarmed that such a sizable segment of news organizations apparently have violated the most fundamental tenet of journalism: sacrificing the reader’s interest for commercial gain, ’’ Klott wrote.

Klott’s constant crusade led Myron Kandel, founding financial editor of CNN and a former SABEW president, to describe Klott in an obituary “as the conscience of business journalism.”

After his death, a number of business journalists and Klott family members formed the “Gary L. Klott Business Journalism Ethics Fund” to advance the cause of ethics in business journalism. SABEW began holding an annual ethics symposium in his memory. The first was held in 2003.

The ethical issues business journalists face today vary, ranging from the continued need to provide fair coverage to how to incorporate personal brands that proliferate in the digital world. Barney Calame, who retired from The Wall Street Journal as deputy managing editor and now teaches at SUNY-New Platz, sees the challenge of maintaining impartiality online when the journalist’s personal voice and conclusions become included in straight news stories.

“I think sorting what is genuine fairness and what is false balance is one of the most complicated issues journalists have to deal with these days,” Calame said.

Investments, and how journalists deal with them, pose another potential problem. As journalists and their families make their own investments, Dubroff wonders how that might affect their reporting.

The future promises even more potential ethical conflicts. Luecke noted that the difficulty of “covering the global dimension of business and finance presents new issues, too, especially when writing about companies in countries with different attitudes about the press, data, regulation, etc.”

Other concerns include how to use the information that appears in blogs, facebook and texts, Dubroff noted. He worries about how social media often allows for “potentially uncomfortable and hidden relationships between news staffers and the subject of stories… I think that as news organizations get stretched thin looking for revenue or try new digital platforms it may be tempting for them to take ethical shortcuts or lose sight of the need for news and advertising to remain separate.”

While some of the today’s topics touching upon ethical consideration will remain the same, one in particular stands out, said Jane Kirtley, the Silha Professor of Media Ethics and Law at the School of Journalism and Mass Communication at the University of Minnesota.

“A huge challenge I see, now and in the future, is dealing with sponsored content,” she said. “It’s creeping into many legacy publications, and requires a high level of transparency to have any hope of passing the smell test, and even then, there’s a risk that readers/viewers will see it as little more than a thinly-disguised advertisement.”

As it has for more than four decades, SABEW’s leaders and members will grapple with existing and emerging ethical challenges.

“I think SABEW has done a lot to raise the standards for practice and done it in a positive way by encouraging members to do the right thing without imposing heavy sanctions on those who fall short,” said Dubroff. “Education and dialog have been our principal tools and that’s been helpful. I think the organization fosters relationships between members so that there are a lot of member-to-member gut checks to see what might be an appropriate response to a particular situation.”

Gail DeGeorge, of Bloomberg News, noted the organization’s role as well. She described SABEW as “the standard bearer for ethics in business journalism.”

Jill Spitz, SABEW’s 2012-13 president, noted that the organization has taken stands on ethical issues in the past by issuing news releases, writing letters and supporting symposiums. She said the Klott seminars will continue and possibly even be expanded.