“Business is boring,” said Dan Johnson, senior finance major at TCU, who reads the Wall Street Journal daily and listens to NPR one to two times a week for business news. Johnson admitted that many of his peers lack the enthusiasm he has for staying up-to-date with the complex and perceived to be mundane topic of business and economic news.

“There isn’t an obvious side to take, like in politics where it’s democrat versus republican, good versus evil or vice versa depending on who you are,” Johnson said. “It can be a lot more difficult to read.”

This year, “Millennials” (ages 18-34) are projected to surpass Baby Boomers as the nation’s largest living generation. And while local television, which reaches about nine in ten U.S. adults, currently remains the primary place American adults turn to for news, a clear shift is taking place in terms of how people, especially young people, are getting their news.

Whether it be concerning, sad or a mix of the two, only 53 percent of online respondents, not only millennials, in a new Pew Research Study had ever even heard of NPR. Instead, numbers from 2014 bring more evidence that news is a part of the explosion of social media and mobile devices, and it may have the opportunity to reach more people with news than ever before.

Thirty percent of U.S. adults get their news from Facebook, which isn’t incredibly surprising considering 71 percent of online adults in the country use Facebook. Half of Facebook users say they get news there even though they did not go there looking for it. And this isn’t just a millennial thing.

John Harvey, professor of economics at TCU, said he gets most of his news from Facebook, using the site to filter interesting news his way.

“I have many friends who are also economists and when one of us comes across something of interest, we post it,” Harvey said. “Their ultimate source varies widely: BBC, Wall Street Journal, The Economist, AP Wire, Reuters, etc. In that way, we collectively serve to screen news articles for each other.”

In terms of millennials, social media has an even stronger pull, as Facebook users who get their news at the highest rates are 18 to 29 year olds. 71 percent of Crowdtap survey participants, all millennials, listed social media as a top priority in their lives, engaging in it daily. 60 percent of these same millennials said they depend on social media to keep up-to-date on current global and local news.

However, what’s concerning about this new found reliance on social media, primarily Facebook, for news consumption is that recent evidence finds these consumers have very low levels of engagement with the news sites. Visitors who arrive directly at a news site typically spend over four minutes at that site, looking at more than 24 pages on average monthly. Those same users who arrive from Facebook spend about a minute and a half on that news site, looking at only four pages during that same time.

This lack of business and economic news coverage isn’t only happening on new age social media sites such as Facebook. Traditional media organizations and primarily those on television, which still reach the most Americans as previously stated, have begun to drop the ball on business coverage.

According to a Media Matters report, the total amount of television news coverage devoted to the economy and business related issues declined significantly across all networks during the second half of 2014.

And while these statistics along with many others in this report are startling, I found that the most noteworthy was that economists account for only 3.2 percent of all recorded guests during economic news coverage. Political guests and journalists make up almost the entirety. Those who could provide expert analysis, actual economists, represented only 23 of the 715 total guests in segments on the economy during the second half of the year. And apparently this is normal according to past trends.

This makes it incredibly concerning that even if more Americans start following economic news coverage, even if more young Americans start following economic news coverage, the coverage and news they will receive will merely follow the political agenda of whichever network they tune in to and not actually provide them with concrete, expert knowledge from professionals.

So where should Americans, young Americans, turn for their news? Where do they turn?

Well, when looking to digital news, a NiemanLab poll found that 54.3 percent of millennials favored Vice, Slate, Buzzfeed and similar “non-traditional” sites for their news. This seems to show how young people are changing the way news is consumed and where they prefer to consume it.

Vice Media, the global digital youth brand with an audience of 130 million viewers/readers a month, has become one of the fastest growing channels on YouTube. It’s innovative site, paired with HBO, with 60 Minutes-style investigative pieces that would often times be too risqué for the CBS mainstay, have made Vice News appealing to younger audiences.

“Our approach and the way we are trying to package what we do is radically different to what we see in terrestrial TV,” Kevin Sutcliffe, the head of news programs for Vice Media, said at the Guardian International Television Festival in August. “Vice News isn’t TV news. We are building it out of an already engaged online audience in their 20s. We are in a different space. Response to people moving away from the old fashioned forms of TV news, whether that’s news bulletins or 24-hour [rolling news] TV. We have responded to that.”

Vice is now valued at more than $2.5 billion after receiving a $500 million investment in September from A+E Networks and TCV, so it’s safe to say that this new form of media has found success.

Vice has also continued to adapt and add to their repertoire as a news provider, recently partnering with Snapchat to provide more mobile access to their stories. Snapchat’s new tool, ‘Discover,’ allows media outlets like Vice to post bite-sized content on the popular messaging app.

Snapchat currently is working with ten media partners, including CNN, ESPN and Vice who release new editions of their Discover content every 24 hours, featuring both videos and articles from the companies. A goal of these media companies is to hook a new, younger audience that doesn’t often connect with traditional media. Personally I use Snapchat’s new ‘Discover’ tool daily, and will often share videos and interesting stories I find on Vice with friends and vice versa on my mobile device. 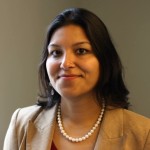 And mobile seems to be the most apparent future of news. S. Mitra Kalita, (right) managing editor at the Los Angeles Times and former executive editor at Quartz, a business news outlet built primarily for tablets and mobile phones, said that the mobile trend is simply how news outlets must now connect with their audience.

“Rare is the person who doesn’t have a smart phone. Our model is shareable so they discover us mostly through Facebook, Twitter, and other sites such as Reddit and LinkedIn,” Kalita said. “I think over the last few years traditional organizations gave up on younger readers in an era of bleeding and major cuts. Now they see young readers via mobile, iPads, watches or texts as their future.”

Hanna Jane Stradinger, senior entrepreneurial management major at TCU, said she gets nearly all her business and daily news from her mobile phone. For business news, she said she uses the Wall Street Journal app and their breaking news alert system, which sends her direct messages. And for daily news Stradinger said she subscribes to the Skimm, a free daily e-mail newsletter with an editorial perspective.

“The Skimm does a great job of reaching both younger audiences and audiences that wouldn’t typically read the news on a daily basis,” she said. “It gives a very easy to understand description of top news stories and provides links to read up on further details.”

This concept Stradinger brings up regarding easy to understand news seems to get back to the idea of why business and economic news doesn’t seem to attract the average young reader. Most readers, especially young readers, lack background knowledge on complex economic issues that are difficult to explain in short news stories. Professor Harvey compares it to reading sports news.

“You don’t seek out NFL news if you don’t understand football,” Harvey said. “Reading every economics article you find online isn’t very useful if you don’t have a frame of reference to interpret them. This is especially problematic when many of those authoring the articles also don’t have a firm grasp of the underlying processes.”

Harvey said this lack of understanding might not be that different for older readers, but they may have a vested interest to stay informed.

“Even if I don’t understand the stock market, if my retirement money is there, then it’s a topic of interest to me,” he said.

Kalita, however, said she believes that this idea of having a vested interest is beginning to occur within young people, who will soon become much more connected to business news.

“I think young people are actually obsessed with money in a way we haven’t seen before because they are the first generation to risk being worse off than their parents,” she said.

This responsibility of growing up in a struggling economy may force young readers to more closely follow areas of business and economic news that they never would have. Yet the only seemingly certain thing is that they will be following this news on their mobile devices, and sharing news on the go through social media like never before.

Matt Kupchin is a senior at the Bob Schieffer School of Journalism at Texas Christian University.