The Rise of Income Inequality Coverage

While income inequality may have been on the rise since the early 2000s or even earlier, media organizations generally didn’t talk about it much until around 2011, and we’ve seen a second spike in coverage of the topic during the past year.

Bloomberg Television transcripts contained the term 141 times in 2013 and just 64 times in the previous one.

What’s more, the term barely got any attention at all before 2011. CNN.com and Bloomberg TV transcripts mentioned it just 10 times each in 2010. The Times mentioned it more frequently – some 46 times in 2010 – but at a rate that still pales in comparison to recent coverage of the issue.

When it comes to coverage of income inequality, it’s difficult to tell who started covering it first.

“Bloomberg’s been covering income inequality for a while, and that’s mostly because people have been talking about it for a while,” said Victoria Stilwell, an economics reporter at Bloomberg. “This is something that’s been written about way before Obama – especially on Bloomberg’s end,”

That may be true for Bloomberg’s print operations, but Bloomberg TV transcripts reveal that the term “income inequality” didn’t receive a single mention in segments during 2007 or 2008. 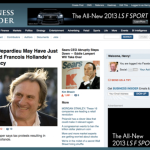 Gus Lubin, deputy editor at Business Insider, said that the site posted its first article on income inequality in early 2010 – a collection of charts showing trends in income inequality that would “blow your mind.” The article, in typical Business Insider fashion, contained 15 charts with short, punchy captions. It ended with a chart captioned “If you aren’t in the top 1 percent of American earners, you’re pretty much screwed.”

“In the early days of our website, that was one of our bigger hits,” Lubin said. “In the next couple of years, lots of people would do similar articles.”

Different explanations exist as to why the term has begun to crop up so much more frequently.

“I think it is influenced by politics,” Lubin said. “We [at Business Insider] don’t have a clear political orientation, but we do like to cover things that people are talking about.”

“Part of it is that things really are getting worse; part of this is that we have new research,” Lubin said, crediting the rise of what he termed the “economic blogosphere” for more in-depth coverage of such seemingly abstract and technical topics as income inequality. More of the work of economists and academics is easily accessible online – and they can publish and share their work much more easily, he said.

Josh Boak, an economics writer at The Associated Press, offered a similar explanation, saying that until recently, reporters didn’t have good measurements for looking at income breakdown. “We had the Gini coefficient, but pre-Piketty, we really didn’t have a great way to look at the top 1 percent, 0.1 percent, 0.01 percent of earners,” he said in an email. 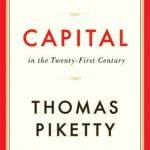 The Piketty reference is Thomas Piketty, a French economist whose most recently released book “Capital in the Twenty-First Century” has topped best-seller lists. In it, he seeks to alarm readers of the dangerous effects that wealth inequality has on social mobility. He suggests an 80 percent tax on incomes above $500,000 in order to level the playing field between those who inherit wealth and those who don’t.

George Washington University economics professor Joann Weiner offered a few potential reasons for the increased media attention granted to income inequality, but she said she thinks that much of the increase in coverage has to do with the recovery since the 2008 economic crisis. She said that many of the most wealthy lost a lot of their investment wealth in the downturn, but they have begun to recover that wealth, so we are again seeing rising wealth inequality.

She also credited the conversation around the 2012 presidential election with increasing media coverage. “During the 2012 election, there was much made of the fact that Romney made a lot of money and he didn’t pay a lot of taxes.”

“Economists have known about this data for a long time,” she said. Weiner also said Piketty’s work has been influential in bringing the issue of income inequality to the public eye.

Henry Blodget, co-founder and editor in chief of Business Insider, has written numerous opinion pieces about income inequality, warning of its potentially disastrous effects on the economy and on the lives of average Americans. Though he’s in a high-level editorial position, he hasn’t hesitated to make his opinions known on the issue. He wrote a 2012 article titled “Dear America: You should be mad as hell about this.”

“Some people call him an idiot or a Marxist; some people think he is spot on,” Lubin said. “He takes a pointed angle to it.”

The short answer to that question is that there are several popular ways of measuring income inequality, but nearly all show some increase in the phenomenon in recent years.

The Gini coefficient is perhaps the oldest and most familiar of these measurements, and it is often used to compare income inequality among different countries. A perfectly income-equal society would have a Gini index of zero while a “perfectly unequal” society would have an index of 100. The Gini coefficient is helpful for looking at the large-scale picture, but it doesn’t necessarily capture more subtle patterns.

Piketty famously uses the capital-to-income ratio to determine levels of wealth inequality. He looks at the amount of money that is stored in inherited wealth versus the amount of money that is actively circulating through incomes. When the capital-to-income ratio become too high, he argues, we see a more and more unequal society where most of the money is in the hands of the extremely wealthy.

These are just a couple of ways to look at income inequality – many others exist.

Knowing that there are many different ways to measure and study income inequality raises the question: Do reporters understand all this data well enough to explain it to everyone else?

“These are complex issues, and reporters – myself included – do not always understand them,” Lubin said. “If people make mistakes, they get corrected.”

That said, Lubin insisted that reporters covering the economy are constantly reading each other’s articles and that they learn from each other over time. “On the whole, there are a lot of people in the media that understand this better than they did a few years ago.”

Weiner warned against the kind of press coverage that doesn’t contextualize inequality data well enough and doesn’t deal frankly with the options for fixing it. “I welcome the media coverage, but I think that if you leave it at the 30,000-foot coverage, you’re missing the story.”

She said she thinks that while worrying about income inequality may draw readers, she doesn’t believe it’s worth the amount of attention it receives. “It’s all in the top 0.01 percent – that’s where you get all the fun stories,” she said. “There’s no inequality once you get rid of the tippy top. To me, it’s not worth worrying about.”

It’s not as much fun to write that story though, she said.

“You probably get better reporting in the financial press rather than the popular press,” Weiner said. She used the Wall Street Journal, the New York Times and the Financial Times as examples of such financial publications that offer quality coverage.

“Not every reporter can have a Ph.D. in economics like I do,” she added.

Weiner said there is still a lot of controversy among economists as to how growing income inequality will affect the economy in the long term – and whether it makes sense to try to curb income inequality through redistributive programs or other means.

The best argument to reduce income inequality, she said, is that when income inequality gets to be too large, the wealthy may take over the political processes and shape the society into one that better suits their interests.

Boak said that as a reporter he has spoken with economists who span the ideological spectrum and who have different ideas about how income inequality may affect economic growth in the future. “The primary difference of opinion that exists is we don’t really know the consequences.”

Weiner wrote an article for the Washington Post in January titled “Four reasons why Obama can’t do much about income inequality.” In it she cites data from Alan Krueger, Obama’s former chief economist, showing that the rich are seeing their incomes increase at a much more rapid rate than are the middle classes.

She argues that luck – who your parents are – is the biggest factor in determining where you’ll fall in the income distribution. She also notes that fewer people are marrying those with different levels of education. In other words, we see very few couples these days in which one spouse has a college or graduate degree and the other spouse has just a high school diploma. Finally, she cites the increasing cost of a college education as a barrier to social mobility.

The only one of these factors that’s really fixable is the cost of college, said Weiner.

Readers are used to the income inequality coverage now. They’ve been hearing about it for a few years. “At this point you have to be saying something interesting,” Lubin said. He said interesting charts and graphs and an interview with someone who knows a lot about the economy are all features that tend to bring readers to an article.

Most of his articles on the topic come from reading data-laden reports – not from talking to economists, and he tends to target the average American, Lubin said.

Regarding growing income inequality, Boak says he thinks that the American public senses it on the ground level – whether by a failure to get a raise or other means. “I think that the public tends to have a pretty good awareness,” he said. “They know that something’s off.”

Hamrick is a business journalism senior at UNC-Chapel Hill. She will intern at the Triangle Business Journal this summer.