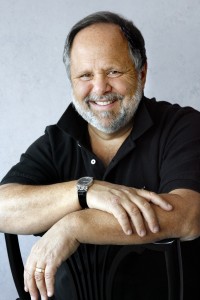 Born April 24, 1950, is president and publisher of USA Today. Prior to that he was an adjunct professor at the Newhouse School at Syracuse University and a media consultant. He authored “C-Scape: Conquer the Factors Changing Business Today,” (HarperCollins) in 2010. He was the first president of CBS Digital Media and founder, chairman and CEO of CBS MarketWatch. Prior to that he spent 20 years as an editor and business reporter for The Washington Post and the San Francisco Examiner. He has a BS in journalism from Syracuse and an MBA from Harvard.

From age 12, when I was a newspaper delivery boy for the Bergen Record, a suburban afternoon newspaper in a New Jersey suburb of New York City, all I wanted to do was work for a newspaper. I loved being the guy who could run into a room and tell a story first and best, and I lived for the wide eyes of the kids who would listen to me when I told them.

I never forgot that the magic was in those eyes. While I was in love with telling a story, I always knew that telling a story when no one was listening was just no fun at all. So if I could see they were bored or had heard the story before, I knew when to stop talking.

That lesson, that success was measured not by how well I told the story, but how well it was received, served me well for the rest of my life, as a journalist, as a manager and very much so as an entrepreneur.

I’m convinced that the success of Marketwatch.com can be traced to the fact that it started to serve a consumer need that we identified and the rest of the financial news industry ignored. Because we paid attention to that, and focused on those consumers, we were able to build a terrific business that was sold 7 years after it was created for $525 million.

It is, in fact, a good business story itself.

In the mid 1990s people were getting excited about Wall Street again. Tech stocks were starting to boom, and something called the Internet was giving people the sense that there might be a big change coming in how we could get information and communicate. Small start-up companies were becoming huge businesses over night.

Everyone wanted to be a part of this new gold rush, and invest in companies that would grow so quickly that even the investors would make fortunes. And there were growing beliefs that stock brokers were more worried about their own income and weren’t much help to the investors who wanted to bet big on some exciting start up companies. So people were beginning to trade for themselves at home, using a new generation of brokerages that allowed them to do so without the help of a broker.

As a business journalist and then a newspaper editor for 20 years I was acutely aware that business readers were hungry for information that could help them invest, and that most business journalism that influenced the markets was being delivered only to people who paid a lot for it and got it immediately on any one of several financial terminals, including those from Reuters, Dow Jones and Bloomberg.

Those terminals cost around $2,000 a month, and they also delivered real-time stock and bond information. Consequently most were installed in business locations and paid for by employers.

And we knew that the rapidly growing community of at-home day traders would demand real-time financial news to help them get through their trading day. So we decided that as long as the only good suppliers of that news made considerable money charging for it, there could be an opening for an advertising supported business that could offer the information free to the user: the model essentially used by content creators who served the mass market.

Newspaper were charging a quarter in those days because they had to prove that someone bought the paper, not because the quarter contributed a real income. If they could, they would be giving them away.

On the Internet, we didn’t need to charge anyone to prove they had read us. We could keep track of every page view. So advertisers would know exactly how many people saw their ad. They liked that and were willing to bet on this new form of information delivery. And since many new electronic brokers were popping up to serve this new audience, we had a huge list of potential advertisers who all wanted to reach our specific audience.

So we launched Marketwatch.com in October 1997. And we covered the most traded stocks first. Our readers were trading Yahoo, AOL, Microsoft and other high fliers of the time, so we needed to watch those stocks. And our reporters were just as good as those working for the “big boys.”

So to our readers, we did as well as our high-priced competitors. Gradually we built the site up by adding more and more journalists, always assigning them to the next most heavily traded companies and sectors.

When the advertising bust of 2000 occurred, we stayed the course and believed in our model, finding additional sources of revenue while we waited for advertising to return. We believed there were still huge numbers of people who wanted to read our content, but couldn’t or wouldn’t pay the price of the expensive terminals.

It worked. When advertising returned, we were still there and many of our competitors had folded or become for-pay sites. Our advertising numbers roared back and we were well on our way to building a juggernaut.

In the end, everyone in the company was so focused on our customers and what they wanted that even Dow Jones, arguably the best financial news organization in the country, was willing to pay half a million dollars for a small company with just over 100 journalists who covered the same thing as they did.