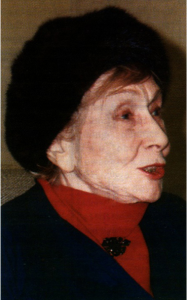 When Clare Reckert started at The New York Times, it was a boys club, and she was a secretary.

But that didn’t stop Reckert from pursuing her dream of becoming a journalist.

When many of the male reporters were drafted for World War II, Reckert took the opportunity to move into the newly available editorial and writing positions.

“She used whatever opportunity she could to get herself a foot in the door,” Randall Forsyth, Clare’s nephew and longtime editor at Barron’s, said.

Reckert, who is now recognized as one of the first female business journalists, started out using the byline of “C.M. Reckert.”

“She had to go to great lengths to make sure nobody knew her gender,” Forsyth said.

Reckert spent a lot of time doing “make-up” for The Times, so she designed the pages of the business desk.

And according to Reckert’s longtime friend and colleague Bob Flaherty, it was during one of these “make-up” sessions when Reckert spotted Orville Dryfoos, the publisher for the paper. She quickly told Dryfoos that she would like to have her byline with her story.

“He thought for a moment and said ‘yes,’” Flaherty said. “That’s how she became the first woman business journalist.”

Forsyth said an editor later let her use her full name as long as she dropped the “i” so she couldn’t be recognized as a woman.

“Forget about a glass ceiling, she had to kick down the door,” Forsyth said.

Forsyth said she never let her gender get in the way of her reporting, and that she often used it to cultivate new sources.

“She was able to get a hold of and publish those financials,” he said. “Which was great.”

Reckert went to great lengths not to disclose her sources, even to her nephew.

“I never did find out how she got that exclusive,” he said. “To get an insight into one of the richest family-run businesses in the world.”

Forsyth said Reckert also spent most of her time reporting on corporate earnings and mergers and acquisitions.

“She certainly did not have a formal background in finance,” Forsyth said. “She picked it up by asking questions.”

In the 1970s, Reckert set her sights on being inducted into the New York Financial Writers’ Association.

Up to that time, the association had been a men’s only club, much like the rest of Reckert’s profession.

But Reckert wouldn’t take it.

Every year, the association hosted a show titled “Financial Follies.” The event was male-only, and members of the association spent the evening lampooning major figures in finance and government.

Myron Kandel, a longtime colleague and friend of Reckert, said she decided to crash the party one year.

“Clare got dressed in a tuxedo, and I don’t know what she did with her hair, and crashed the dinner,” Kandel said. “She was a gutsy lady.”

Reckert later fought the organization for admittance, and, in 1972, she and fellow financial reporter Dorothea Brooks were accepted.

Reilly said her organization now has a scholarship in Reckert’s honor.

Kandel, a founding financial editor for CNN, said once Clare was admitted to the association, she returned to the “Financial Follies” as one of the actresses in the show.

“I would describe Clare as gutsy, determined, hardworking who took no guff from anyone,” Kandel said.

Forsyth said Reckert didn’t stop after she was admitted to the association.

“She was also interested in helping other women advance,” he said. “For other women entering journalism, she felt like she should give them whatever help and guidance they needed.”

Forsyth said she also worked to make the gender gap less noticeable for her colleagues.

He said Reckert spent a lot of her time at The New York Times meeting new people, and trying to have as much fun with her co-workers as she could.

“She was one of the guys in the best way possible,” Forsyth said.

Forsyth said Reckert loved her job at the paper, and put off retirement as long as she could.

“She loved God and her family first,” Forsyth said. “But The New York Times was right up there.”

Jenny Surane is a native of Charlotte, N.C., a and a business journalism major in the Class of 2015 at the University of North Carolina at Chapel Hill.