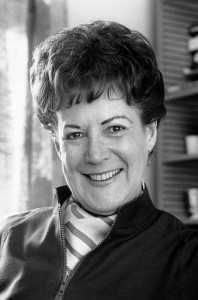 Financial reporter and columnist Sylvia Porter was groundbreaking. She was the first female in the field, and her approach to financial reporting and advising broke business jargon into simple terms. She devoted herself to helping middle class Americans understand the changing economy and save and invest wisely.

Porter was born on June 18, 1913, to a Russian-Jewish immigrant family in Patchogue, N.Y. Her father was a physician, but when he died when Porter was 12 years old, her mother started a business making and selling hats.

In the late 1920s, Porter’s mother lost all her $30,000 in savings in the stock market. When the market crashed in 1929, Porter switched her major at Hunter College from history and English literature to economics. Porter’s successor in writing the personal finance column, Kathy Kristof, said Porter wanted “to understand what was making her life — and the lives of everyone around her — so miserable.”

Immediately after, Porter started working at a Wall Street small investment counseling firm to learn about currency fluctuations, the stock and bond markets, and business cycles. At the same time, she got her MBA from New York University.

In 1934, Porter began her career in financial writing. She wrote a thrice-weekly financial column called “S.F. Porter Says” for the New York Post and used the byline S.F. Porter to conceal her gender. The Post told her to do so, as men dominated the field, and the paper feared a female writer would not be taken seriously. However, Forbes investment writer John Wasik said that Porter revolutionized the industry; “Prior to Porter, financial columns were mostly men writing about stocks they liked,” he said.

One of Porter’s competitors, Jane Bryant Quinn, said ironically she and Porter ended up defining personal finance as women’s work. Quinn said, “The upside of this was that it attracted female readers – women who probably hadn’t had much to do with their own personal finances. As the divorce rate grew, and as more women entered the workforce and had to make more decisions on their own, the presence of female voices was especially helpful.”

By 1938, Porter became the Post’s financial editor, yet it was not until 1942 that most of Porter’s readers realized their trusted financial guide was a woman, let alone a 29 year-old. Once this news was out, Porter used it as an asset and decided to become a broadcaster on New York’s News Talk Radio WJZ “What Can I Do?” program.

She quickly climbed the ladder to success, because she informed and advised in a way that was easily understandable, and she was not afraid to expose financial corruption in government and businesses.

Porter was an activist as well as a writer; she boldly criticized government officials for their fiscal policies but also advised several U.S. presidents. Porter’s personal finance column reached more than 40 million readers at its peak and was syndicated by The Los Angeles Times and 450 other newspapers around the world.

Porter also began a column in The American Banker on the United States government securities market and then started an information service on government bonds. She was a leader in the start of the U.S. Savings Bond program and bought bonds herself. Kristof said that Porter “amassed a fortune the old fashioned way — getting rich slowly through consistent savings and hard work.” Porter wanted America to be a level playing field but also urged individuals to take personal responsibility.

Additionally, Porter wrote all kinds of books, primarily on taxes, saving, and investing. In 1939, Porter published “How To Make Money in Government Bonds,” which was the first book to ever cover all government finance and explain it in simple terms. Seeing the need for more streamlined news, Porter wrote “If War Comes to the American Home” to explain the country’s national defense.

Beginning in 1960, Porter published “Sylvia Porter’s Income Tax Guide,” which she published annually until she died more than 30 years later.

In 1961, Porter gave a speech titled “Business News for Everyone” to the Associated Press Managing Editors Association in which she explained her finding that people want to read business news, if they could understand it. She said, “We in America are living through the most profound, glorious income revolution in all history, which means that for the first time the vast majority of Americans are earning enough income to be acutely interested in reading in simple language about trends in jobs, paychecks, living costs, and taxes.”

In 1978, after 43 years with the Post, Porter began working for New York Daily News. Porter also wrote monthly articles for the Ladies’ Home Journal from 1965 to 1982.

In 1975, she published one of her most successful books, “Sylvia Porter’s Money Book: How to Earn It, Spend it, Save It, Invest It, Borrow It and Use It to Better Your Life.”

Dr. Tracy Lucht of Iowa State University’s Greenlee School of Journalism and Communication is writing a biography of Porter and said Porter “showed that the middle class had real economic power, as the U.S. became a consumer society. Porter was an absolute hawk on inflation and persuaded many people to look for bargains on everything, from life insurance to the food they put on the table.”

Keeping up with the changing times, Porter also endorsed and attached her name to a series of personal finance software packages for home computers in the 1980s.

Porter’s last two books were “Your Finances in the 1990s” and “Planning Your Retirement,” which she worked on in her final months before she died on June 5, 1991.

Porter received 14 honorary doctoral degrees for her leadership in financial journalism and advising.

Kathleen Hayes is a business journalism major and Morehead-Cain scholar from Wilmington, N.C. Hayes has interned and studied in Tanzania, India, and Australia and is pursuing a career in consulting. Her interests include tennis and education in developing countries.