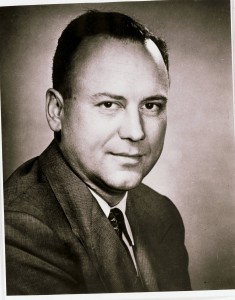 When Barney Kilgore became managing editor of The Wall Street Journal in 1941, he knew he had inherited a failing business.

With an eroded circulation of 33,000, the narrowly focused financial paper neared bankruptcy. Its credibility – devastated by misleading pro-market coverage of the Great Depression – showed no signs of restoration.

Kilgore knew The Journal needed to change, and he had the vision for its overhaul.

“The easiest thing for the reader to do is to stop reading,” Kilgore continuously advocated during his leadership.

With that in mind, Kilgore resurrected the newspaper that had given him his first job – revamping its entire content, style and focus to earn and maintain reader interest.

“It’s clear that Barney Kilgore is pivotal in the history of The Journal and is a legend around the place,” said Richard Tofel, president of ProPublica and author of a book about Kilgore titled, “Restless Genius: Barney Kilgore, The Wall Street Journal, and the Invention of Modern Journalism.”

“He really conceived the modern Journal, and he set up a pattern and style that still has an enormous amount of influence in journalism today,” Tofel added.

Born into a traditional, humble home in Albany, Ind., Bernard “Barney” Kilgore was described as a precocious child. At age 16, he enrolled in DePauw University, where he majored in political science and gained experience as editor of his campus newspaper, said James “Jim” Kilgore, the son of Barney Kilgore and president of The Princeton Packet.

Upon graduation, Kilgore started work at The Journal in September 1929, seven months before the U.S. stock market crash. He rose through the ranks of The Journal quickly, becoming a columnist at age 23 in 1931, Washington bureau chief at 26, managing editor at 32 and general manager of Dow Jones & Co. at 34. He eventually became president and chairman of Dow Jones.

His influence extended beyond The Journal, a subsidiary of Dow Jones.

Warren Phillips, chairman of Dow Jones until 1991, worked as a reporter under Kilgore’s leadership. He said Kilgore’s pioneering concepts were threefold: news was not just what happened yesterday, but included trends that developed over time; business news was national, not local; and business news was not dull but could be lively and jargon-free.

“Barney was revolutionary because he made business news exciting for the consumer,” Phillips said. “His concept was that business news affects people’s lives – that there are more people taking out home mortgages and loans and saving their money than there are bankers.”

Kilgore also created the “What’s News” column at age 25, which – 80 years later – is still featured on The Journal’s front page. Serving as a succinct summary of the news, the column was also designed to explain the significance of the news.

Jim Kilgore said his father’s devoted and curious nature produced other breakthroughs that still characterize The Journal: “a-heds,” the quirky front-page stories, and the formula of the anecdotal lead followed by the “nut graf,” a paragraph that explains the heart of a story.

Kilgore made strides in developing a weekly national newspaper, The National Observer, which he had hoped would synthesize all of the week’s news into a condensed publication. The newspaper closed 10 years after his death.

“When (Kilgore) died, he hadn’t gotten The National Observer right. He knew he hadn’t,” said Tofel. “He might have if he had lived somewhat longer.”

The younger Kilgore said it was his father’s character that drove The Journal to excellence.

Jim Kilgore remembers the vacations he took with his father as a boy. On one trip to Florida in 1956 – as tensions of the civil rights movement began to boil – he recalled his father stopping at a gas station to change a tire.

“A white fellow, who was the manager of the gas station, couldn’t figure out how to change it. So, a black fellow came up and helped us and fixed it right away,” Jim Kilgore said. “As we drove away, my father said to us, ‘See, that shows us that the color of your skin makes no difference.’”

“It was powerful, and at that moment, I knew how ethical he was,” he said.

“People liked him. He wasn’t the kind of guy that would hug you or show a lot of emotion,” Jim Kilgore added. “But he cared about everyone at The Journal. He would make suggestions to people and make them feel like the ideas were theirs.

“He never would seek the glory of it – he just felt good about seeing things accomplished.”

Those who worked at The Journal said Kilgore’s impact was lasting. “He was a great fellow, and he really built up the company to what it is today,” said Don Carter, who served as executive director of The Wall Street Journal’s Newspaper Fund in the 1960s.

Phillips said Kilgore continued to ask about The Journal up until his final days of 1967, when he died of stomach cancer. In 2000, the TJFR Group, publisher of a newsletter about business journalists, and MasterCard International named Kilgore the ‘Business Journalist of the Century.’

Caitlin McCabe is a native of Winston-Salem, N.C., and a business journalism major in the Class of 2014 at the University of North Carolina at Chapel Hill.