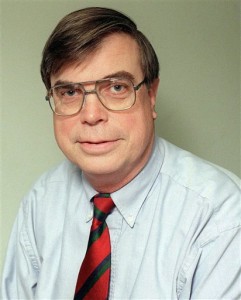 After the stock market crash in 1987, the market began to make itself more accessible to the general public. As interests rates fell, Americans began to take their money out of bank accounts and invest in the stock market. Mutual funds and 401(k)s grew in popularity, but investors needed someone to explain these markets to them.

Chet Currier was that person.

“That’s what Chet was put on earth to do,” said Jim Kennedy, former business editor at the Associated Press. “He was there when the market changed, and he led us all by the hand.”

Chet Currier reported on the markets for 37 years, writing for the AP from 1970 to 1999 and then Bloomberg News from 1999 to 2007. He was an institution in business journalism and pioneered reporting on the mutual fund market.

Described by former co-workers as a hard working perfectionist, Currier’s strongest asset was his ability to write with his audience in mind and convey financial news in a way that could be understood by the general public. Michael Millican, a former business editor at the AP, said Currier was able to cover Wall Street for many years without losing interest and enthusiasm in the topic, which was a rare gift.

Joyce Rosenberg, a former coworker at the AP, said: “He knew what his mission was: to report something in a way that people would be interested in so that they would understand it and want to keep coming back. He understood who he was writing for.”

Currier became the AP’s full-time Wall Street reporter in 1974. He wrote, “At that time, the Dow was sagging under 600, mutual funds were thought to be an endangered species, and the AP was just beginning to broaden its coverage of investing and personal finance.”

Currier reported Wall Street news during the day, publishing his first story of the day within 30 minutes of the market opening. He then wrote a Wall Street story every hour for the rest of the day. Millican said that in spite of the thousands of stories Currier wrote, he managed to keep them “fresh, insightful, accurate and concise.”

Kennedy said that one of Currier’s main talents was his understanding of the long-term movements of the markets, and he approached every story with this bigger view in mind.

“People wouldn’t have the kind of awareness they have today without the foundation Chet built during those years,” said Kennedy. “Can you really credit that to one person? I think so. The AP was the one that was communicating with 1500 newspapers around the country. Chet Currier was the caretaker of that to the general interest reader. I knew in my head and my heart that he understood that was the role he was playing.”

In 1999, Currier received the Distinguished Achievement Award from the Society of American Business Editors and Writers. When he and co-worker John Cunniff were honored with this award, SABEW President Susan Wells said: “These two men have given nearly every paper in the country the opportunity to have depth and analysis in their business report, even if they had next to no business staff.”

At Bloomberg, Currier wrote two columns per week about mutual funds and personal investing. His last article was published on June 29, 2007.

“What impressed me most and what I try to emulate today is how his mind always seemed to be working on something,” said Craig Currier. “He had this way of mentally processing and computing things that I don’t think everybody has. It was thoughtful but also exact.”

Currier wrote and updated “The Investor’s Encyclopedia,” which helped the average investor understand the markets and how to approach investing. He also wrote three other books, “The 15-Minute Investor,” “Careers in the ‘80s” and “Careers in the ‘90s.”

Chet Currier was born in New York in 1945. He received his bachelor’s degree from Amherst College, served in the Navy from 1966 to 1970, and worked at Fairchild Communications for a short period before joining the AP. He died in 2007 from prostate cancer; he was 62 years old.

Natalie Cooper is a native of New Orleans, La., and an economics major and business journalism minor in the Class of 2013 at the University of North Carolina at Chapel Hill.