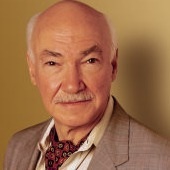 Jerry Flint and Arthur Ochs Sulzberger, publisher of The New York Times , stood next to each other as they looked at the newsroom and Flint said his goodbyes.

Sulzberger looked to Flint and said, “Most of these guys I’d like to fire. You – you I’d like to keep.” Kate McLeod, Flint’s wife of 22 years, recalls this moment as being special to Flint.

Described as “a character,” “an unstoppable force” and “a straight-shooter,” Flint covered the automotive industry for more than a half a century wearing a variety of outfits ranging from the fedoras and capes he wore to news conferences to the lab coats and clipboards he used to sneak into automotive design labs with Jim Dunne, a former spy photographer for Popular Mechanics.

Throughout his career, he reported on everything from politics to urban life and of course the automotive industry. He won several awards, including the Gerald Loeb Award for Distinguished Business and Financial Journalism, being named one of the 100 most prominent business reporters of the 20th century by TJFR Group and MasterCard International and was even selected as one of 40 finalists to be the first journalist in space before NASA canceled the program.

However, as most people closest to him recall, little of this mattered to Flint. “He didn’t care about awards or anything,” McLeod said. “He was amazed that he was successful. He just kept his head down and did his work.”

Flint was born Yehudi Meyer Flint in Detroit, Mich., on June 20, 1931. He attended Wayne University where he studied journalism.

Flint joined the ranks of professional journalists after serving three years in the U.S. Army in a European intelligence unit. In 1956, he started at The Wall Street Journal where he was a staff writer covering business and finance for 11 years.

He then moved to The New York Times in 1967 as its Detroit bureau chief. While there, he covered the automotive industry and 1967 Detroit riots and famously broke the news of George Romney’s “brainwashing” gaffe during his 1968 presidential campaign. In 1973, Flint moved to New York for The New York Times working the national news, then as a financial editor, then the national labor writer.

Finally, he joined Forbes in 1979 as its Washington bureau chief. During his time as Forbes, he was also assistant managing editor and senior writer at the Forbes headquarters in New York. After retiring in 1996, he immediately returned to Forbes to become a columnist.

At his roots Jerry Flint was a writer, said Joe Flint, one of Jerry Flint’s four sons. Even after moving up the corporate masthead to the number two position at Forbes, Jerry Flint chose to move back down. “The higher up he went and the more he was taken away from reporting, the less happy he was,” Joe Flint said.

After years of covering the automotive industry, Jerry Flint knew the industry better than anyone else. He had an encyclopedic knowledge as some referred to it. He could see trends and understand the future of the automotive companies better than anyone else. “You’re dealing with two types of people in PR: the car people and the business people,” Baron Bates, then vice president of public relations for Chrysler, said. “Jerry was the most knowledgeable editor about business.”

Even when no one else believed what he was saying, Flint stuck by his words. For example, 30 years ago when Chrysler was on the brink of collapse, no one but Lee Iacocca, then-CEO of Chrysler, and Flint believe it could be saved, and Flint wrote an article in Forbes detailing his reasoning. The management of the magazine, so skeptical of his article, printed a disclaimer at the beginning of the article explaining the opinion represented in the article was of Flint’s and Flint’s alone.

As we all know today, Flint was right.

Despite his distinction and immense knowledge, Flint wasn’t egotistical and was always willing to pass down wisdom to younger colleagues, Joe Flint said. It was these characteristics that got him the title of “the dean of automotive journalism.” He also had a strong work ethic, a skill lacking among many journalists today, Joe Flint said.

He did the proper research, talked to the right people, and wrote his articles; he wasn’t just reading other journalists work and writing an opinion based off of that.

Jerry Flint’s contributions to journalism are matched only by the ways he influenced the automotive industry.

McLeod said Flint, although humorous and kind-hearted, had no interested in being friends with the people he covered. “They were terrified of him and hated him – which is the best thing you can be as a journalist,” she said. “But he was also greatly respected not only in the automotive world, but also by his peers. When I founded a scholarship in his name, they all sent checks.”

Flint was never afraid to tell the automotive executives what he felt. He was always honest and forthright with the companies and expected the same from them. McLeod said it was hard to anger Flint or cause him to hold a grudge, but that he hated when an executive would lie or spin numbers. He was also not afraid to call out an executive at the podium during a conference if that happened.

It was during a meeting that Flint gave the speech that would travel the world seven times over and was read by every automotive executive and journalist. He was invited to General Motors Co. in 2001 to give a speech to the company’s engineers and technicians. Unlike most speaking engagements, his airfare, accommodations, and meals were not paid for.

When McLeod asked Flint why he was willing to pay for everything, he responded simply, “I have to do this. I have been invited into the inner sanctum.” The speech, heard by dozens of employees, lambasted the company, its strategy and its executives. He said, “You are badly led, with an organization that just doesn’t work.”

It was this tenacity and voraciousness that made so many executives respect him. It was not uncommon for executives to call Flint asking for advice about how their products compared to competitors, said Steve Kichen, assistant managing editor when Flint was at Forbes. One time during a news conference, Iacocca started a sentence with “As Jerry Flint would say…” and Flint’s response was, “Sometimes I quote Lee, and sometimes Lee quotes me.”

Even though these companies were also the advertisers that provided vital revenue to the newspapers and magazines he worked at, he never held back a criticism. “He had a soft spot in his heart for the home team- the Americans,” Kichen said. “He was always pushing them to upgrade their product because they were so far behind foreign competitors.”

As he got older, Flint faced heart and other health issues, which resulted in a bypass surgery. However, nothing was able to slow Flint down. Throughout his retirement and until the day he passed away, he was writing six columns a month for various publications.

“Jerry didn’t know what it meant to stop,” Kichen said. “I was amazed how often he would get on a plane and go out to Detroit for a car preview at his age.”

“Detroit is like going into the military. Most come and go,” Bates said. “But Jerry stayed. He was one of the unforgettable characters in a very, very good way.”

Flint loved books and a good story. One of his favorites was “What Makes Sammy Run?” by Budd Schulberg. On McLeod and Flint’s first date, he gave her a business card and on the back he wrote a quote from that book. “‘Work hard, and, if you can’t work hard, be smart; and, if you can’t be smart, be loud.’ Jerry was all three,” McLeod said.

Nicholas Sanford is a native of Sherrills Ford, N.C., and a business journalism major in the Class of 2014 at the University of North Carolina at Chapel Hill. He is also a multimedia journalist at Reese News Labs.