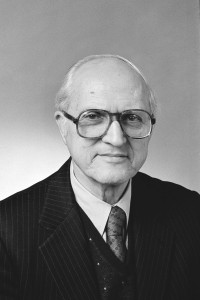 Isadore Barmash gained notoriety in the field of business journalism for his thorough, behind-the-scenes reporting of the retailing beat, one of the most closely watched areas of coverage in the business world.

Barmash’s coverage of the retail industry was unprecedented in its depth and breadth. He covered fashion trends, the successes and failures of big businesses, executive decisions, corporate corruption, major mergers and hidden management biases that affected blacks, Hispanics and women.

He showed readers the reality of the retail industry that’s often hidden behind the facades of fashion, marketing and advertising.

“He was a model for all beat reporters: smart, accurate and told you how things really worked in the retail business,” said Hank Gilman, former deputy editor of Fortune magazine. Gilman covered the retailing beat for The Wall Street Journal when he competed against Barmash in the 1980s.

In a successful career that endured more than four decades, Barmash gained his journalism experience and credibility working for a variety of publications. He wrote for Fairchild Publications in the early 1950s, was managing editor of Women’s Wear Daily from 1955 to 1963 and was a reporter for The New York Herald Tribune in 1963 and 1964.

Barmash joined The New York Times in 1965 and retired in 1991 after 26 years. He continued to write freelance articles and books on retailing in the decade following his retirement.

During his 26 years with The Times, Barmash wrote almost 4,000 articles. Many of his pieces involved businesses that were major advertisers with The Times, but Barmash steadfastly refused to let the relationship between the newspaper and its advertisers influence his coverage of the retailing beat.

His fearlessness earned him respect at both The Times and competing newspapers such as The Wall Street Journal. “He had no fear of some of the newspaper’s biggest advertisers and, thus, no fear of the publisher. The separation of church and state was alive and well on his beat,” Gilman said.

In addition to his successful journalism career, Barmash wrote a dozen books. As an author, Barmash was able to cover major issues within the retail industry in a more thorough manner. He published his first novel “Welcome to Our Conglomerate – You’re Fired!” in 1971, which detailed corporate mergers.

On Barmash’s novel “Net, Net: A Novel About the Discount Store Game,” published in 2003, John E. O’Toole wrote in the Chicago Sun Times that “the whole book is sheer serendipity for those of us who had despaired of encountering a novel about business that contained a ring of truth. [Barmash] touched on some verities about that most fragile of business entities, the creative organization.”

Readers enjoyed Barmash’s books because he wrote about the retail industry in a way that was both understandable and entertaining. According to The Times, his first book “Welcome to Our Conglomerate – You’re Fired!” was chosen by five book clubs, including the Book of the Month Club.

In The Times article “Isadore Barmash, 84, Prolific Chronicler of Retail Wars, Dies,” which commemorated Barmash after his death, Floyd Norris, who was the chief financial correspondent of The Times when he worked with Barmash, lauded Barmash as “the consummate retail reporter.” “He knew everything there was to know and everybody there was to know in the field,” Norris said.

Forseter describes Barmash as “owl-like: soft-spoken with horn-rimmed glasses and round facial features.” Although some of Barmash’s colleagues may have considered him to be soft-spoken, his written work assertively exposed a side of the retail industry that was previously unknown to the public.

Barmash was born in Philadelphia, Pa., in 1921. He studied journalism at the Charles Morris Price School in Philadelphia. Prior to his journalism career, Barmash served in the Army in the South Pacific during World War II.

Barmash died in Jamaica, Queens in 2006.

Barmash won seven Publisher’s Merit Awards and was nominated for a Pulitzer Prize. He was also nominated by the TFJR Group for the Top 100 Business News Luminaries of the Century Awards for the 20th century.

Italia Marr is a native of Charlotte, N.C. and a Journalism and Mass Communication major in the Class of 2015 at the University of North Carolina at Chapel Hill.