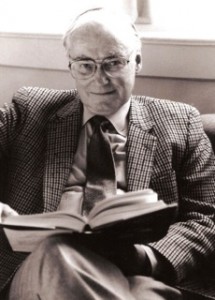 A martini-loving tennis player was one of the most influential editorial writers of the 20th century.

As editor of the editorial page of The Wall Street Journal for 25 years, Robert Bartley had a great platform to influence other people. As Bartley puts it in his letter of recognition written in 2003, “My proudest boast is that I’ve run the only editorial page in the country that actually sells newspapers.”

Bartley loved America, and wished freedom of the people through free markets. He was an avid advocate of capitalism and strong national security for the United States. He could foresee the worldly dynamics through his deep insight.

Bartley was born in 1937 and raised in Marshall, Minn., where Republican sentiment widely prevailed at the time. Bartley worked in the Chicago bureau when he joined The Journal in 1962. Three years later, he joined the editorial page, which he took over in 1972.

Bartley believed that editorial pages should not only provide perspectives on a matter, but also be a page for independent reporting. Only through avid search for truth could one have an opinion on an issue. He also expanded the op-ed pages of The Journal to discuss not only socioeconomic affairs but also arts, culture, and leisure.

“Bob Bartley admirably studied the subject and talked to people who knew the best about the issue,” said Peter Kann, the former chief executive officer of Dow Jones & Co. and a long-time journalist at The Journal.

Bartley felt strongly about macroeconomic issues and nsational security. He strongly influenced the economic policy agenda of the Reagan administration. Bartley was the primary advocate for the supply-side stimulation and a believer of predictable and stable currency.

Until the early 1980s, the U.S. government believed in raising taxes to achieve a balanced budget. Perhaps influenced by the Nobel laureate economist Robert Mundell, Bartley challenged the conventional wisdom and suggested that the government cut marginal tax rates to stimulate the economy to allow greater flexibility of the economy. Bartley helped to popularize the policy application of the supply-side economics.

He was also skeptical of arms control. While the voices to disarm were prevalent after the long-lasting Cold War era, Bartley firmly believed in staying fully armed as a nation. He believed that communism would not last much longer, and that it was going to fall apart from its internal feud. The Soviet Union collapsed in 1992.

Although The Journal is perceived to be near-biblical channel of communication for big businesses and corporations, Bartley was a proponent of small businesses for they encourage market competition.

In his piece titled “Down with Big Business” published on April 18, 1979, Bartley argued that “the very biggest businesses are such unreliable allies in the fight to preserve a free enterprise economy. . .Historically capitalist economies have prospered through competition, innovation and particularly a sensitive price mechanism transmitting unimaginably efficient signals for less production here and more investment there.”

While Bartley engaged in discussion of controversial issues through his editorial writing and as an editor of The Journal, he never confronted others for holding a different view; He would politely listen and say “that’s a point of view” –a gentle expression of disagreement.

He was also a trustworthy and reliable person. He stayed as a loyal employee and trustworthy editor for those whom he works with. “When his employees got in trouble, he stood up for them. He never bad-mouthed those around him, and I am yet to hear anyone speak badly of him,” said Thomas Bray, who worked on The Journal’s editorial page from 1976 to 1983.

In contrast to the common perception of him being a quiet and reserved person, Bartley was always a busy, active man.

“I could just see his brain working, just thinking – his mind was very busy at work, and often he was deeply occupied with his critical thinking to speak. He truly thought before he spoke,” said Edith Bartley, his wife. She also told that he loved talking politics over martinis and was a competitive ping-pong and tennis player.

Looking at how the world is shaped now, Bartley’s insightful opinions seemed as if he could foresee the world. Bartley shaped the landscape of editorial writing of the modern newspaper and had huge impact on the public policy of the United States through his writing.

Bartley won a Pulitzer Prize for editorial writing in 1980. Bartley also won a Medal of Freedom a week before he passed away. He died in December 2003 from cancer.

Yoon Jeung Eum is an economics major from South Korea in the Class of 2013 at the University of North Carolina at Chapel Hill.