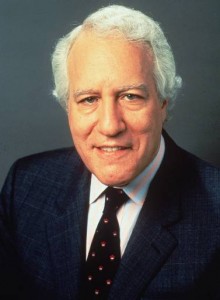 Television journalists whom viewers feel they can trust without reservation are as rare as they come.

But Louis Rukeyser, the best-selling author, columnist, lecturer and television host, was the first and one of the few television journalists whose economic expertise and charming personality attracted one of the most loyal followings in financial television history.

Louis Richard Rukeyser was born Jan. 30, 1933, in New York City and grew up in the nearby suburb of New Rochelle. Born into a family of financial journalists, Rukeyser developed an unusually thorough understanding of economics at an early age.

Rukeyser’s father, Merryle Stanley Rukeyser, was a nationally syndicated economics columnist who wrote for the New York Tribune and the New York Evening Journal as one of the first true financial journalists. Rukeyser’s brother, William, was managing editor of Fortune and his two other brothers, Robert and Merryle Jr., were corporate communicators with IBM and Newsweek, respectively.

Rukeyser graduated from Princeton University’s Woodrow Wilson School of Public and International Affairs in 1954, choosing to specialize in public aspects of business. He took a $55-a-week reporting job at the Baltimore Sun and became the London bureau chief within five years.

In 1970, Rukeyser was chosen to host of Maryland Public Television and PBS’ newest venture, Wall $treet Week. The weekly half-hour special was the first financial journalism television program, carving the way for major business news networks such as CNBC and Fox Business Network.

The show transformed the public’s opinion of Wall Street, introducing the notion that not just the rich could become personal investors.

The show thrived under Rukeyser’s natural talent. Billed as an expert in show business and a master of panache, Rukeyser delivered pun-filled, easy to understand commentary on topics audiences previously viewed as dreadfully dull. Rukeyser insisted his guests use language that audiences could easily understand, often using the line, “Now say that again in English.”

In 1979, People magazine named the deep-voiced, silver-haired personality as the only sex symbol of “the dismal science of economics.” Those at PBS jokingly dubbed him “the Big Bird of prime-time” for his ability to rake in underwriter support and high public viewership.

Andrew Leckey, president of the Donald W. Reynolds National Center for Business Journalism, said Rukeyser treated his guests on Wall $treet Week just as he would treat his personal friends.

“When he brought guests on, he was amiable but also had a little edge to him,” said Leckey, who knew Rukeyser personally. “People thought he was a smart cookie who was watching out for their interests. Like having a really bright uncle who was seeing into things for you.”

“I think Rukeyser as the showman was always realty on display on New Years Eve,” Hudson said. “Just Lou in a tuxedo and all the guests in gowns and everything else – it was very much a throwback to television’s heyday. It was a celebration of the year regardless of what the equity and capital markets may have done. And it just made for good, fun television.”

Wall $treet Week ran from 1970 to 2002, attracting an audience of 6 million regular viewers – the most of any public television series – at the show’s peak in the mid-1980s. The show earned more than $6 million a year and was carried by 300 PBS stations.

Rukeyser’s influence on the market became so strong that academics coined the term “The Rukeyser Effect” to denote the phenomenon that stocks mentioned on his Friday evening show would rise the following Monday.

Nearing the end of its 32 years on PBS, Wall $treet Week began to suffer a steady decline in viewership due to emerging competition from networks like CNBC and new financial shows such as “Nightly Business Report.”

In 2002, Rukeyser quit Wall $treet Week in a nasty dispute with Maryland Public Television and transferred to CNBC a month later with the debut of “Louis Rukeyser’s Wall Street,” though neither show lasted much longer.

“It wasn’t Rukeyser’s fault,” Friedman said. “It wasn’t CNBC’s fault. It was just he was so established on Friday nights on PBS, I think any kind of change would have been jarring to the viewers and once you establish yourself on television, it’s very hard to reestablish yourself,”

In 2003, Rukeyser left CNBC when he began undergoing treatment for multiple myeloma, a type of bone marrow cancer.

Rukeyser died in 2006 at the age of 73. He won the Gerald Loeb Lifetime Achievement Award for Business and Financial Reporting in 2004.

“His style, his wit, his compassion, he was just a model journalist,” Friedman said. “He’s the best. He’s still the best.”

Thompson Wall is a business journalism major at the School of Journalism and Mass Communication at the University of North Carolina at Chapel Hill.