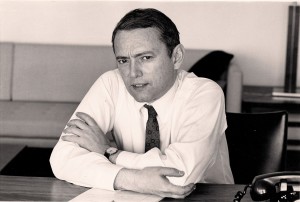 “Question everything” might have been Daniel “Dan” Seligman’s motto had the communist Karl Marx not penned it.

A quiet, conservative, calculating man and master statistician, Seligman served as a writer for 47 years at Fortune magazine, from 1950 to 1997. Polite in personality, yet curmudgeonly in writing style, he wrote the “Keeping Up” column in Fortune for more than 20 years. He also wrote for Forbes, Commentary and other publications.

The son of a furrier, Dan Seligman was born on Sept. 25, 1924. Seligman began and retired from his writing career in New York City. Seligman attended P.S. 166 in Manhattan, along with three other future Fortune magazine writers, from 1930 to 1938. In an account of his grade school days, Seligman details a class ranking system his first grade teacher, Ms. McGee, instituted.

“But the distinctive feature of her regime was a fine-grained ranking system that repetitively reseated each child according to his or her latest class rank,” said Seligman.

The “smartest” student sat in the first seat in the first row, and the dumbest kid (who Seligman described as a “hooligan”) sat in the last seat in the last row. Seligman recalled himself sitting in the fourth seat, first row, most of the time. He noted three of the top four students in his first grade class “went on to write serious books,” including himself. Seligman’s book, A Question of Intelligence: The IQ Debate in America, explains how mental ability affects success in life -­- the thesis of which was only furthered by his and the other top-four students’ success from Ms. McGee’s class.

Dan Seligman attended Rutgers University for just more than a year before joining the Army. A sufferer of asthma, Seligman’s military career proved to be quite brief — he was discharged 1 month and 23 days after he joined due to a severe asthma attack quelled by a shot of adrenaline (but not after an attempt to stop the attack with a syringe of distilled water, to see if he was just faking it).

Seligman graduated from New York University and began writing professionally. He first wrote for The American Mercury, Commonweal and The New Leader before settling into a career at Fortune magazine. Throughout the years, he held several editorial positions at the publication but always continued to write his “Keeping Up” column.

In the workplace, Seligman was quiet and soft-spoken.

“He actually physically let his journalism do the talking,” said Andy Serwer, who was a junior writer at Fortune when Seligman worked there and is now the managing editor of the magazine.

Serwer also described Seligman as courteous and wry, as well as being a thinking man.

“He was a thinker, he spent time pondering — a lost art now, I think,” said Serwer.

Seligman was the mentor to Carol Loomis, a writer at Fortune magazine who has been with the publication for more than 50 years. He was her first editor and taught her “an enormous amount” about writing and magazine journalism. She remembered Seligman as an adviser as well as a friend. Concerning her success at Fortune, she says Seligman deserved a lot of the credit.

“He also was a champion of women at Fortune well before Time Inc. moved glacially into acknowledging the talents of the women journalists on its staff,” said Loomis.

Loomis and Seligman were suspicious of fast writers because they were both measured and deliberate in their writing.

Seligman notably criticized liberal viewpoints in his articles, yet did not spare the political right from his shrewd statistical analyses. Utilizing LexisNexis, a service developed to assist journalists with databases of legal and public records, he wrote about human behavior, intelligence, economics and gambling. Seligman wrote articles about the correlation of mortality with socioeconomic status, the effectiveness of horse race betting as a means of money laundering, and the correlation of attractiveness and income in lawyers.

Dan Seligman was a good father, much like his own father, Irving Seligman, after whom he modeled his parenting, said his daughter Nora Favorov. He was loving and was a firm believer in family. Always checking others’ thinking and logic, Seligman did not spare his family from his analytical mind.

“At the dinner table, if you said anything stupid, you’d be immediately torn apart,” said Favorov.

Seligman passed away on Jan. 31, 2009, yet left behind a catalog of works- some controversial, most critical, but all entertaining and witty. His beliefs and computer-like mind, coupled with his writing prowess, created articles that were informative and thought provoking, yet humorous.

Connor Elledge hails from North Wilkesboro, N.C., and is a sophomore advertising major at the University of North Carolina at Chapel Hill.