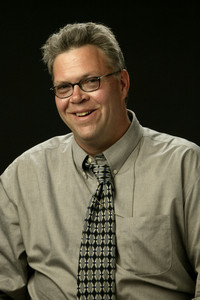 Laura Fahrenthold met her future husband Mark Pittman on her first day of work at the Times Herald-Record in 1995.

When Pittman walked into the newsroom, the attraction was immediate and intense. She says it was love at first sight.

The first thing she took note of was his size.

“He was a big man, at 6 feet 4 inches and 280 pounds,” Fahrenthold said. “He was so big, striking and handsome. He commanded a presence, when someone that size walks into a room people notice.”

Within a week of meeting, the couple moved in together.

It was at Fahrenthold’s urgings that Pittman took a job at Bloomberg News, where he worked until he passed away in 2009 when he was 52.

“I recognized that he was wasting his talents at Times Herald-Record,” she said. “Once he got to Bloomberg, he could work on really great stories and make a name for himself.”

Before his award-winning work at Bloomberg, Pittman started his career as a crime reporter at the Coffeyville Journal in Coffeyville, Kans., after he graduated from the University of Kansas in 1981.

In a February 2009 interview with Ryan Chittum, the deputy editor of The Audit, Pittman talked about the ways that his crime reporter background helped him with his financial stories at Bloomberg:

Pittman spent one year working in Rochester, N.Y., at the Rochester Democrat & Chronicle. He moved on the Times-Herald Record where he met his second wife, Fahrenthold.

In 1997, he started working at Bloomberg and 10 years later he writing stories that foreshadowed the country’s worst financial crisis since the Great Depression.

In 2007, he was reporting on the process of banks bundling home loans into securities for sale to investors as subprime borrowers were defaulting on their mortgages at an increasing rate.

“He was starting to sound the alarm that there  was going to be a crisis before anyone else knew what was going on,” said Christine Harper, chief financial correspondent for Bloomberg.

“I thought the work was very important at a very difficult time,” she said. “He was heading through the fog, and he was one of the only journalists who had a real understanding about the incredibly complex financial instruments that he was covering.”

At the same time, he was writing about the rating agencies, such as Standard & Poor’s and Moody’s, that evaluated mortgage backed securities.

In June 2007, Pittman wrote an article with the headline “S&P, Moody’s Hide Rising Risk on $200 Billion of Mortgage Bonds,” which was criticized by Portfolio.com for pointing fingers at the ratings agencies.

But in July, Pittman wrote another story about the rating agencies. This time, it was even more damning and the evidence was nearly impossible to ignore.

The July article was headlined “S&P May Cut $12 Billion of Subprime Mortgage Bonds” and explained that the company was downgrading billions of dollars of subprime bonds “because the housing slump is worse than the company anticipated,” the article reported.

Pittman’s stories in the summer of 2007 exposed the agencies’ role in the subprime mortgage crisis before other media had a grip on the gravity of the situation.

“It puzzled me then and puzzles me still that we were doing stuff that no one else was doing,” said Bob Ivry, a close friend of Pittman and reporter at Bloomberg.

In 2008, Pittman won the Gerald Loeb Award in 2008 for a Bloomberg series called “Wall Street’s Faustian Bargain,” which explained how 5 percent of U.S. mortgage borrowers missing monthly payments could lead to a freeze in lending throughout the world.

His first story in the series, “Subprime Securities Market Began as ‘Group of 5’ Over Chinese,” lays out how five corporate executives created a standardized contract for betting against the mortgage backed securities on the market.

Subprime mortgages are more risky and more likely to be defaulted on since the borrowers have low credit scores and were required to pay higher interest.

In Pittman’s interview with The Audit, he talked about his article, “We did a five-part series on the whole idea of why the subprime crisis occurred, and it starts with this story about how a bunch of traders at Deutsche Bank, Goldman Sachs, JP Morgan got together and said ‘We need a standard contract to be able to short the mortgage market.’ As soon as I realized they were going to try and short the mortgage market I said, ‘Oh. That means they think the market is going down.’

‘Best financial journalist in the country’

Ivry said one of Pittman’s greatest strengths as a journalist was his ability to write water tight stories that followed up words with documents.

“He was honest and transparent, and he believed in using data rather than taking people’s word for it,” said Ivry, who worked with Pittman on subprime mortgage stories. “I thought he was the best financial journalist in the country because what he did was talk to a lot of people and he would use those tips to look at data and documents to see what was going on. He used the two best ways of getting information: talking to people and getting documents.”

Joseph Stiglitz, a professor at Columbia University in New York and the winner of the 2001 Nobel Prize for economics, commented on Pittman’s death in Ivry’s Bloomberg obituary and called him  “one of the great financial journalists of our time.”

Harper said she was proud to have known and worked with Pittman during her career at Bloomberg.

“He was very tolerant, so he never got angry at people,” Harper said. “He had such a good relationship with the banks. He was trusted by sources and liked by sources even when he was exposing stuff that they didn’t want him to expose.”

She said when Pittman died, some of the executives at Goldman Sachs, who he had covered, were very saddened and upset to hear the news.

“They didn’t like some of his stories, but they liked him as a person and they knew they could trust him,” she said.

In Ivry’s eulogy for Pittman, he quoted an email from Chris Atkins, a friend of Pittman and vice-president of communications at Standard’s & Poor.

“You might like to know that Mark was greatly respected at S&P,” Atkins said in the email, according to Ivry’s eulogy. “He always went the extra mile to get the story from every angle, top to bottom, side to side. I never called him once to complain about his stories about S&P because I never could find a factual error.”

Ivry said Pittman wanted to ensure that every word in his stories was true.

“Once he established certain facts he tried to refute them,” Ivry said. “He was always testing whether his facts were correct ones. In the end, you have the type of stories that can’t be knocked down.”

In an interview on Bloomberg TV, Bloomberg Editor-in-Chief Matthew Winkler said Pittman was a persistent reporter who tirelessly sought the truth.

“Mark Pittman proved to be the most fearless, most trusted reporter on the most important beat during the 12 years he wrote about credit markets, corporate finance and the Federal Reserve at Bloomberg News,” said Winkler, in Ivry’s obituary. “His colleagues will miss his laughter and generous sense of mission. Bloomberg readers were rewarded by his many achievements, culminating with a federal court ruling that validated his search for records of taxpayer-financed policies withheld from the public and the Gerald Loeb Award.”

The only reporter to sue the Fed

In 2009, Pittman filed a Freedom of Information Act request with the Federal Reserve Board to find out how much money the Fed was lending and who it was lending to during the bailout.

“The Fed had committed $7 trillion and no one seemed to know about it, and to this day when people talk about the bailout they talk about TARP (Troubled Asset Relief Program) and not the Federal Reserve,” Ivry said. “One of the things I still think about is why more journalists didn’t embrace what we found.”

Bloomberg filed the lawsuit against the Fed in November 2008. The court case, Bloomberg L.P. v. Board of Governors of the Federal Reserve, sought to obtain documents called term reports, which contain information about the billions of dollars the Fed lent to banks at the height of the crisis.

Three years later, in November 2011, Bloomberg won the lawsuit and acquired thousands of pages of Fed documents, but Pittman was not alive to see the victory.

“The banks would have liked people to believe that it was just a few banks that needed help and then things got better and now lets just moved on,” said Harper. “And now its just not possible to make that argument, and its because of Mark’s work.”

Ivry said the 29,000 pages of Fed documents and central bank records of more than 21,000 transactions uncovered an entirely new narrative of the financial crisis from 2007 to 2009.

“We reported that in one day, on Dec. 6, 2008, the Fed had lend out $1.2 trillion overnight,” Ivry said. “The bank CEOs had the cover of secrecy and could say that things were fine, but we could catch them in a lie.”

As the Fed lent out billions of dollars, members of Congress and the Bush administration that worked on TARP were unaware that this was happening, Ivry said.

In a Bloomberg article headlined “Secret Fed Loans Gave Banks $13 Billion Undisclosed to Congress,” Ivry and his colleagues Bradley Keoun and Phil Kuntzre reported that bankers hid the tens of billions of dollars in emergency loans, while at the same time assuring investors their firms were healthy.

“And no one calculated until now that banks reaped an estimated $13 billion of income by taking advantage of the Fed’s below-market rates,” the article reported.

Pittman had the support of his colleagues, Winkler and several editors at Bloomberg.

“But there were some people who thought it was a grave mistake and they thought it would disrupt the banking system because they thought banks in the future would hesitate to borrow money from Fed now that the public would know who was borrowing and how much,” Ivry said.

Despite opposition from some, Pittman was driven by the unfairness on Wall Street, Ivry said.

“My goal was: hang the bastards,” Ivry said. “I was more bloodthirsty. [Pittman] was a lot better adjusted than I am. He was about fairness, he would be outraged if something was unfair. He thought, ‘If Morgan Stanley wants to rip out Goldman Sachs, then that’s fine.’ But when you get ordinary people in there with pension funds and mutual funds, that’s where he drew the line.”

In The Audit interview with Ryan Chittum, Pittman describes how Americans should view the Fed and what needs to happen moving forward,

“We have numerous banks— dozens, maybe hundreds that are insolvent. And they become more insolvent every day because more people quit paying their mortgage loans, and more guys move out of the shopping center, and more people quit paying their credit cards…We need to be honest about what the problem is here, how big it is, and how we’re going forward to clean it up, and who’s going to pay for it.”