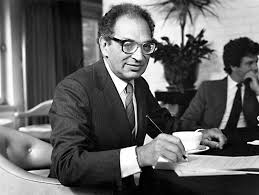 Rick Gordon, former Advertising Age editor and protégé of Stanley Cohen, worked with Cohen for 10 years in the Washington bureau.

“There are some journalists who write because that’s what they do for work,” said Gordon. “I think that writing, putting his thoughts on paper, arguing a case, for Stan, writing was like breathing.”

Cohen worked for Advertising Age for 45 years, almost entirely as its Washington editor and bureau chief. He died in 2013 at the age of 93.

Even though he worked for the primary advertising and marketing trade publication, Cohen was often critical of the industries he covered — especially when he felt advertisers were making exaggerated or false claims. His work as a reporter, columnist and editorialist helped pave the way for the consumer protection movement of the 1960s.

“Stan had a very keen appreciation of the economic functionality of advertising and that it had a very important role to play, but wondered how could you get it to perform in a more effective, honest and useful way than some of the practices that it had fallen into,” Gordon said.

“A lot of the things he suggested became law or regulations and in the long term, helped the ad industry even though they didn’t realize it at the time. A lot of the steps really did give the industry more credibility because consumers now had assurance that what was claimed was indeed true,” said David Snyder, publisher of Crain’s Chicago Business and former Washington bureau researcher under Cohen.

“One of the things that Stan demonstrated at Advertising Age is that a great journalist, and a great business journal, could really help change the thinking of the industry they covered,” Gordon said.

Cohen grew up in Troy, N.Y., as the son of a shopkeeper. He discovered journalism in high school and attended Cornell University to pursue it further. While at Cornell, he rose to the position of editor at The Cornell Daily Sun.

After graduating from Cornell in 1941, Cohen earned a master’s degree from Columbia University in 1942. He went to work for Broadcasting Magazine for a year before going on the final job interview he would ever have; he worked for Advertising Age for the next 44 years.

Those who worked for and with Cohen are quick to laud his efforts as editor, teacher and mentor.

“He was a no-nonsense editor. He could instantly identify inconsistencies or holes in stories, and he knew the industry so darn well that if you were off base on anything, it would be apparent to him immediately. But, he wasn’t punitive in his editing style — he used it as a teaching experience, not as a scolding experience,” Snyder said.

Rance Crain, president and editorial director of Crain Communications, first worked for his family’s company as a reporter in the Washington bureau under Cohen. In the obituary he wrote of Cohen, Crain described him as “my first boss in 1960 when I was fresh out of college, and my best boss. He ingrained in me that what’s best for consumers is best for advertisers, and that continues to be our editorial position.”

Both Snyder and Gordon recall fond memories of Cohen, but Gordon was quick to point out Cohen’s “Energy. Humor. A finely honed sense of indignation about things that weren’t right as he saw them… He was extremely generous with his time, genuinely liked to teach and took immense pride in whenever one of his students did good work.”

Snyder started his career under Cohen and works at Crain Communications to this day. “I can still picture his coke-bottle thick glasses, his style of typing with one index finger on each hand, hunting and pecking away,” Snyder said. “Thirty-one years later, I’m still here at Crain’s. I can attribute a lot of that to the guidance and counseling Stan gave me as an aspiring business journalist entering the business.”

Cohen’s final byline ran in March 2005’s “75 Years of Ideas” issue. In it he wrote: “I know none among my peers who had better reason to feel their years in journalism were well-spent. And that included the satisfaction of knowing that I had fulfilled the hopes of my employers by enabling them to do well by doing good.”

“He was a wonderful model not just for business journalism, but for anyone in journalism,” Gordon said. “He was a dynamo. A real dynamo.”

Andrew Stern is a journalism master’s candidate at the University of North Carolina—Chapel Hill specializing in digital multimedia production and writing. He is from Little Rock, Ark. and received his bachelor’s degree from Northwestern University.